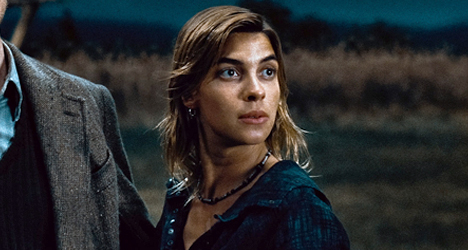 Tena spoke to me on the phone last week about how acting in a film like Harry Potter is different from her work on stage, and whether or not it will be hard for her to say goodbye to her enchanting character.

I read you have dreams based on some of the movies you are working on. Did that happen with Deathly Hallows?

Yeah, I would be doing a forest scene and that night I would imagine I was running in a forest. The world of this film hangs over you and messes with your conscious. Even on the stage, sometimes I’ll be doing my lines over and over again and then when I finish the play I’ll still have dreams where I have to say my lines again. My dreams are quite vivid.

Do you attribute the dreams to anything? Nerves maybe?

Every film and performance you do you always get scared and you always freak out like you’re not going to do it right. But your emotions always change. The first time I did a play, after I got off the stage, I cried and I was depressed for a month. But you get better at that. You get better at letting go and looking forward to the next one.

What came first for you, theater or film and which medium is more rewarding as an actress?

I started with the film About a Boy when I was 16 and then at 18 I started in theater. I love performing live whether it’s with my music or acting. (Tena is a member of the band Molotov Jukebox). You’re dealing with that moment and that situation. With film I sometimes find it hard to wait around for it and not knowing when you’re going to do it. You could be waiting around for three hours hyped up to do a scene and you might lose the momentum. Then you have to turn it on again. It’s just a different way of working.

Where should someone start to understand who you are as a musician?

It’s funny because on [Nov. 15] our new single “Laid to Rest” [came] out. We recorded it at a great studio. It captured the energy and the natural aesthetic of what it feels like to play on stage. People should listen to that.

How did you feel when you read about what happens to your character in the last book?

I liked that my character got to do so much in one book. She gets married, she gets pregnant, she has kids, she goes to battle and she dies. That’s pretty cool.

Were you there on the final day of shooting? I read it was pretty emotional.

No, I wasn’t there. I was there three or four months before. But the wrap party was pretty emotional because you have to say goodbye to everyone all over again.

The fantasy genre is not over for you after Harry Potter. You’re now going to be in the new HBO series Game of Thrones. How is that going?

It’s amazing. We’re shooting in Belfast. We’ve been doing scenes in the forest. The forest is beautiful. There is a lot of shade so we’ve been working during very cold days. I think the show is going to be something quite impressive.

It’s hard to believe the Harry Potter franchise started in 2001. Why do you think these stories have stayed popular for all these years?

The books work. On paper it’s fantastic. There’s no way anyone could fuck it up. It’s like that new Walking Dead series, which is one of my favorite comics. They just have so much material to work with. The key to the success of it are the books.

Is it going to be difficult for you to let this character go and start working on other projects?

It’s not going to be too hard. I’ve been in and out of these films. It kind of felt like it was done for me, maybe because I was doing other things in between. For actors who have been on set day in and day out I’m sure it’s a bigger deal.

How have you seen yourself change as an actress over the last eight years?

I have so many more things to draw from. Every person I talk to or every time anything good or bad happens in your life it is going to affect your acting. That’s what I’m hoping anyway.