Interview with a Superhero: Actor Jason Sedillo on Now Hiring

In the superhero action comedy Now Hiring, which was shot entirely in San Antonio in 2013, SA native Jason Sedillo stars as Joe Martin, a good-hearted, average guy who is unemployed, but searching for a job so he can make his wife happy and also give his life some meaning.

When he stumbles across an ad in the newspaper looking for superheroes, Joe believes it's for a job as a birthday party entertainer, so he goes in for the interview. When he lands the position, he finds out it doesn't entail making balloon animals and eating birthday cake all day long. Recruited by a team of real superheroes, Joe is thrust into a world where evil forces are hellbent on destruction. He soon realizes he and his motley crew are the only ones that can stop it.

During an interview with Sedillo, 39, earlier this week for the DVD release of Now Hiring, the Current asked him about his experience playing a superhero, what it was like to be part of a production that closed off part of downtown San Antonio to shoot a series of action scenes, and how his movie character's life has recently paralleled with his own. 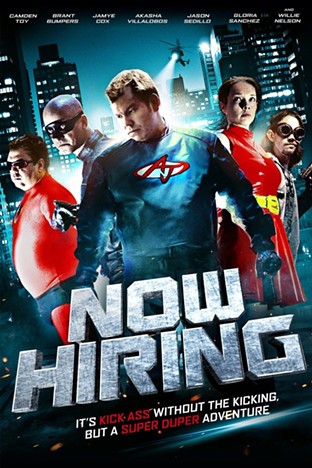 When you see the cover of the Now Hiring DVD, which features you as as the superhero character Average Joe, what is the first thing that comes to mind? Is it surreal to see yourself front and center on the cover of a DVD?

I just think, “No way! It really happened!” It was a long road. When I see [the DVD], I wish all the people behind the scenes could be on the cover. One of the [superhero] suits we tried out was a wetsuit. It was spray painted, so it really didn't breath. We were shooting in a warehouse in July and it was baking. There was a guy, Aaron, who would hold an umbrella over me in between takes. That was his job all day long! Everybody just rallied together and worked for free. It was really cool to see that kind of community.

So, are those your real abs on the cover or are they computer generated?

(Laughs) Definitely CGI. (Laughs) I would mess with our director (Mark Cantu) and tell him, “Man, it was a lot of work to put on this much weight for this role!” He would say, “Man, I never told you to get that fat!”

What's the best thing about playing a superhero?

I think one of the coolest things about it was that this superhero is an everyday guy. He's down on his luck, trying to find a job and trying to support his family. He has an opportunity to be something. The story in the film really relates to all of us. What's my purpose? What's my life goal? Why am I supposed to be here? What does it mean to be “the hero” in your family?

Since this was your first lead role, what did you learn on set?

It's a responsibility. There's no time to be cocky or arrogant. I've seen that in other places. Also, I've learned that what happens in a moment is only in that moment. It doesn't define who people are. People make mistakes and make bad choices, but a couple weeks later they'll come back and say, “Hey, my bad. Can I still play?”

Sounds like you were being a diva on set. Did they give you a trailer to storm off to when you were in a bad mood?

(Laughs) I had a chair. I got to go kick the chair.

You would put it in a corner, sit and pout.

The final scene of the film is a long one set in downtown San Antonio. What was it like working on a tight schedule where the city actually allowed you to close off streets for production? Was there added pressure on the cast to get things right the first time?

We did [that scene] in a day. We had a rolling closure, so we'd block it off when it was time to shoot and then we'd open it up. Mark and the production team did a fantastic job setting up everything ahead of time. It flooded really bad that day. Parts of the highway were closed. But we had to do it. It made some great scenes with the clouds. But, yeah, there was a lot of pressure. I think that's when anxiety was the highest on set. There was so much happening.

Last year, you were diagnosed with an auto-immune disease. How is your health now?

Yeah, [the disease] is called sarcoidosis. It's what [late comedian] Bernie Mac had. There's no cure. It's not cancer, but they can treat it with cancer steroids. I opted not to do that, so I'm trying out holistic stuff. It's rough because there's chronic pain. It's just management of the disease at this point. This is just my opinion, but mindset has a lot to do with the way your body reacts. I try to stay positive. [This disease] has put life in perspective. The way I start my day is to ask myself, “What am I going to do with today?”

Sounds a little like your character in Now Hiring.

Did you get to keep your superhero costume?

Oh, well, maybe it'll become just as famous in movie memorabilia circles as the ruby slippers from The Wizard of Oz.

They should put it in the Hard Rock Cafe. I don't know what they're waiting for!