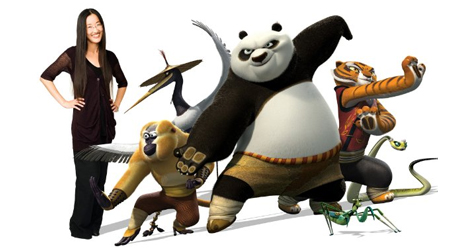 After working in the animation department for 2008’s Kung Fu Panda, story artist Jennifer Yuh Nelson was given the opportunity of a lifetime when DreamWorks decided to produce a sequel after the box-office success of the first.

“Then they asked me to direct it and I was like, ‘OK,’” Nelson told me during an interview to talk about Kung Fu Panda 2. “That’s pretty much how it happened. Once we were done with the first one, we went straight into the sequel and never stopped.”

In the film, warrior panda Po (Jack Black) teams up once again with the Furious Five, this time to protect their land from the villainous peacock Lord Shen (Gary Oldman).

During our interview, Nelson, who is originally from South Korea, talked about what makes Po special to her and the experience she had working with stars like Jack Black and Angelina Jolie.

Since you’ve spent so much time with these characters over the last few years, do you feel closer to any one of them more than the others?

I always liked Po. He’s super sweet. He’s the reason I signed on to the sequel in the first place. I love the character. He is very much a real person. We want to see what he does with his life. Watching him develop has been really fun. Developing Lord Shen as a bad guy was really fun as well.

Do you see yourself in Po at all?

Something I loved in the first film that was also incorporated into the second was the combination of 2D and 3D animation. Would you consider that part of the charm of the film?

Absolutely. There are so many methods of animation and so many beautiful techniques. In the case of the 2D in Panda, it is the way Po’s mind works. When we go into that flat 2D style, it’s like we’re thinking like him. It’s really beautiful to see that, especially since we really don’t see 2D, hand-drawn animation anymore. It’s nice to see what these amazing animators can do with it.

Since you are from South Korea, is it even more special that your first film as a director has an Asian influence to it?

It’s nice that it has this setting and Asian sensibility to it. It is inherent in the genre of a kung fu or martial arts movie. I just try to stay true to the genre itself.

I remember it vividly. I remember all the TV shows we would watch. I was very young, but it’s clear. Most of them were Korean cartoons, but we had a few imports from Japan. I wouldn’t know the actual translations of the names.

Well, what about the characters? What kinds do you remember?

(Laughs) A lot of giant robots.

As a little girl, could you connect with those?

Oh, yeah. I loved the action shows a lot more than the princess shows.

Were you able to control Jack Black while he did his voice work for the film or did you let him run wild in the sound booth?

(Laughs) He’s actually very serene. He did some amazing things during his recordings. But he was a very mellow guy. He would come in and we would talk about the scenes and catch up and then he would go in and work harder than I’ve ever seen someone work. He really gets into it. He’s very sharp.

What about Dustin Hoffman and Angelina Jolie?

Dustin Hoffman is great. He would tell us all sorts of funny little stories. It was like story time with Dustin Hoffman every day. Angelina Jolie was wonderful. She would bring her kids. They would hang out and watch their mom record. She’d wave to them during her work. It was really cool.

Do you have any kids in your life that think you have the coolest job ever?

(Laughs) I have a couple of nieces and nephews who are super sweet. My nephew is actually coming this week so he can go to the premiere. We’re going to have a great time.

Kung Fu Panda 2 leaves the door wide open for a third film. Is that something you’d like to be a part of as a director?

I’d never rule it out, but I’m not a planner as well. Currently, I’m on vacation, so we’ll see how things pan out.

There is still a lot of story to tell.

Yeah, again, Po is a real person and we’re just checking in on him from time to time. Each of these films is a chapter in his life. Even without us, it’s like he would still go on. There’s certainly a lot more story to tell because we built him like a real person. If the audiences want to see more, I’m sure there will be more.