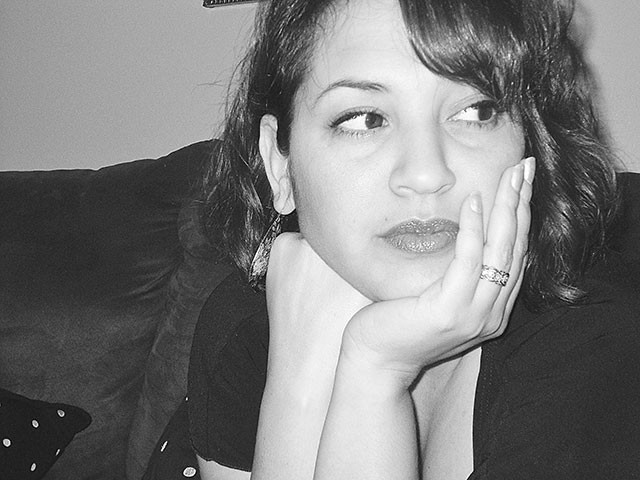 Laurie Ann Guerrero’s collection Tongue in the Mouth of the Dying won the 2012 Andrés Montoya Poetry Prize and was published February 15 by University of Notre Dame Press. Her poetry and critical works have been published by Huizache, Texas Monthly, and Women's Studies Quarterly, among others. Her chapbook, Babies Under the Skin (2008), won the Panhandler Publishing Award, chosen by Naomi Shihab Nye. Listen to her speak with fellow Latino poets Anel Flores, Erasmo Guerra, Joe Jiménez, and Pablo Miguel Martínez this weekend in a panel moderated by Sandra Cisneros. Last week, the Current spoke with Guerrero about her writing. Below are excerpts from our conversation. 4-5 p.m., Festival Room, Central Library.

One of the things about your writing is that the images stay with us, and they’re not always pleasant. What do you want the reader to take away?

Part of writing this book has been of uncovering, for myself. Being from the Southside … a Tejana, whose family worked in the cotton fields, and experienced racism of all kinds, trying to trace that through my lineage, and how it has affected each generation — what is my job in that line? The process of writing these poems has been discovery for me; and while I certainly feel there is a call to action, it is not outward—it is more inward. What am I going to do? What can I do? As an educator, and as a mother, raising my children in the same place where I was raised, I want them to be aware, I want my community — my students, my children — to be aware. Instead of placing blame on other people, we need to figure out why things like this happen: infanticide, domestic abuse, and violence … Our city is divided by race and class. These are the sort of things I am interested in.

But the work seems to speak universally to me. It’s very much about individuals.

Yes, for sure. Being universal — I had this struggle in graduate school about what that was. I tried for a long time to write universally, but decided, I’m just going to write my story, what I am discovering, and let it be. Just let it be.

I think your writing resonates among our staff because it’s like reporting. It’s filled with details, almost clinical at times. Why did you adopt this style?

I battled for a long time of not wanting to fit the stereotype of this loud Chicana — angry woman, you know? But, of course, I am! I can’t help not being angry about certain things in our community and in our country, but there are plenty of people writing in anger — that sounds horrible to say that — but I wanted to approach it in a different way. That has taken quite a few years, to strip that away. If I look at the first versions of this manuscript — it was pretty heated, pretty charged, I should say.

It seems to be a form of witnessing, a very personal thing…

I think that part of where that comes from is that I began teaching about four years ago. When I started, I tried very hard to incite something in them, to make them fight for their education. But I soon realized that part of being their teacher is just to show them: this is our history; these are the people who come before us, their experience. I realized I can’t take my fire and put it inside someone else. But I can expose them to things, and give them access to certain things … I think that in the process of learning to be a teacher, it helps me to learn to be the kind of writer I want to be, as well.

I think there is a cliché of poetry being expression, but you seem to be focusing on the reader, instead…

I think that’s part of it, but not the biggest part. In the process of writing, I come to understand what I already know, and what I believe ... I am hoping that the work might provoke something in them, to look in the mirror at oneself, and at one’s community. Part of that is that I am a mother, wanting to be the best that I can be as a witness and someone who is participating in this community… I have been asked who I write for—most writers might say, “everybody, I write for,” but my first audience is my community, it always has been. It’s hard, I think I put a lot of pressure on myself for that, but that is the only way I can write truthfully… I don’t want to be the only voice in my community, but I want to be a voice.

Is San Antonio a tough audience?

I’ve given readings all over the country, but the hardest readings are the ones I do here at home.