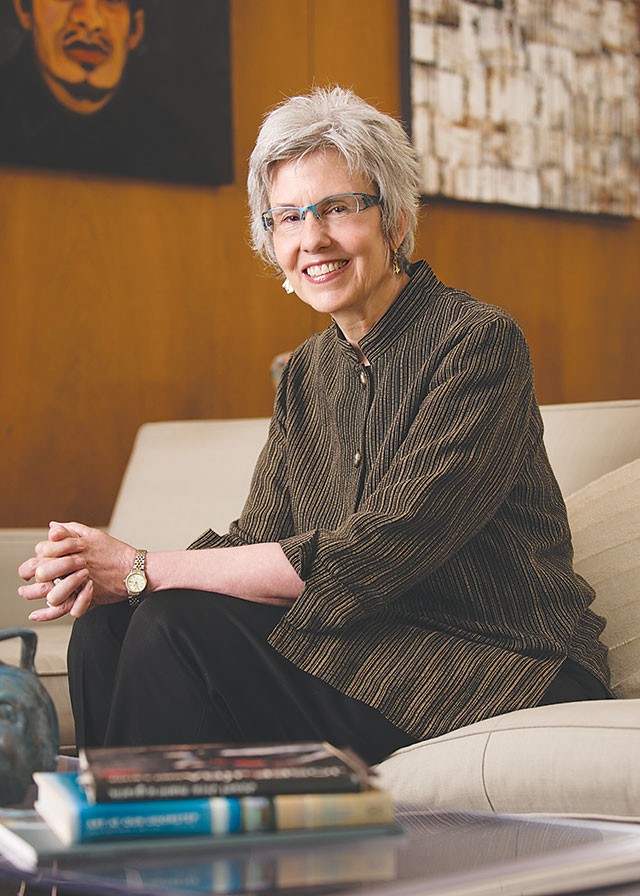 Nan Cuba, professor of English at Our Lady of the Lake University and founder of Gemini Ink, began her career as an investigative journalist; after obtaining her MFA, she began publishing poetry, fiction, essays, and reviews in journals such as the Bloomsbury Review and Descant. Cuba’s debut novel, Body and Bread, which comes May 2013 from Engine Books, examines the effects of suicide on family survivors through a story that ranges from the questions of childhood to the challenges of aging. Watch Cuba and Andrew Porter, author of the novel In Between Days, talk about letting family secrets out of the bag this Saturday. Cuba spoke with the Current about her new book, and what she’s working on now. 10-11 a.m., Gallery Shop, Ursuline Campus

You founded San Antonio’s writing center, Gemini Ink. But before that, you were a journalist. What did you cover?
I sure was, an untrained journalist who was lucky. I was a contributing editor for about five years at San Antonio Magazine and San Antonio Monthly. Then I went to New York, interviewed with editors, and ended up co-writing a series of articles about mass murder and the origins of extraordinary violence for Life magazine and Psychology Today. That’s the subject of my next book — it was a wild ride.

In Body and Bread, you open up some private wounds. Why in the world did you go there?
I had a brother who committed suicide; without me actually planning it, that became the main purpose of the story. Years ago, I wrote a short story about a brother and a sister, it’s now the scene in the first chapter of Body and Bread, where he cuts open a fish. It had a lot of response. I didn’t know that I was drawing on memories of my brother—that never happened. And a friend of mine said that I couldn’t use it — it was too similar to a Katherine Anne Porter story called “The Grave.” I was shocked by that; of course I’ve read all of her work. Porter is a real influence for me, but I had not been conscious of that. I was very bothered, so I went back and looked at the story, and what stood out to me was that it is a brother-sister story, and the brother in the Porter story is named Paul. And my brother was named Paul. So, I knew that something had happened when I read the Porter story. I was very worried in the beginning that people would make that association, then I realized that I am writing to find out how and why he did this, and who was responsible. And now that it is done, and I am talking about it to people, I also want people to see the kind of damage that is done to people left behind.

One of the things I like about the book is that even though it is—it doesn’t read like a psychological novel. I like that you make Sarah, the protagonist, an anthropologist obsessed with the Mexica, the Aztecs, and that you excavate myths we have about Aztlan through her character.

I felt like an anthropologist who usurped another culture for her own needs. I have spent a great deal of life here on the West Side. The last thing I wanted to do was show insensitivity. The same goes for the African American characters.

One thing I found extraordinary for novel coming out of SA, is that you are not writing about the Anglo/Latino divide. I have no idea whether this family is Anglo, Latino — both?

I’m so happy to hear you say that. I hope you pick what seems to serve the story best for you.

Did you do that consciously to allow readers to insert themselves, or is that not part of the story?

It’s not part of the story, I don’t think, but more than that, I have long thought that all artists — writers in particular — should have access to anything. I don’t think they should censure their subconscious. For instance, an Anglo should be able to write from an African American’s perspective, if that’s what the story needs, and vice versa. I have thought about that at great length.

Certainly you have to be competent to produce dialogue for characters who are male or female, young or old…

We need access to all of that. … We all have common emotions, common experiences, and common concerns, and to trust that. When your mind is taking you over to a world that you are not totally accustomed to, you just have to trust that we are all experiencing the same things. So, that’s what I do, that’s what I did with Sarah and her family — just tried to create people that others would relate to.

I don’t want to spoil things, but you’ve got a real twist at the end. At that point, I realized that the anthropologist’s obsession with the Mexica, and the weight of family myth, were both forms of exoticism that had to be escaped.