Just like nearly 20 million other Americans, Habiba Noor and her family watched the December 15 Republican debate in Las Vegas while sitting in their living room with the television's familiar glow bouncing back at them.

Noor, a Muslim, was well aware that Donald Trump, who has suggested a temporary ban on allowing Muslims to enter the United States, would likely defend his xenophobic stance during the circus.

She let her 9-year-old daughter and twin 5-year-old boys stay up to watch it anyway. For her daughter, at least, it was time to understand who Trump was and what he represents.

"What was interesting is that Islam was predominant in that whole debate," said Noor, a visiting professor at Trinity University. "She didn't really understand ISIS and so, in her mind, given the Islamophobia that's out there, and it's so mainstream, when these guys talk about the Islamic State, you create a duality. And so, she's reading that it is like we're bad, so the Islamic State is good. And she asked us if we supported them.

Her daughter is only 9. Yet, it's already necessary for Noor to have that talk with her.

"It's kind of like the sex talk parents have with their kids," Noor says, adding that she and her contacts on Facebook often discuss how to broach that conversation. "You have to think about it, so that you do it in a way that's comfortable for them and you."

Noor knows a thing or two about talking to children about Islamophobia, too.

When al-Qaida militants hijacked planes and flew them into the World Trade Center on 9/11, killing nearly 3,000 people, Noor was living in New York City. After the attack, she began researching the immediate post-9/11 environment and its effect on America's Muslims, particularly those who were children at the time. Most of them are now in their early 20s.

After the attack, Noor said that Muslim children, particularly teens, were forced to become de facto spokespeople for Muslim communities.

"Since 9/11, it's kind of a default state of participation. You have one foot in mainstream society and another in Muslim communities and you're engaged in society," she said.

Speaking about her teenaged niece and nephew, who live in Connecticut, Noor says they are often in positions where they have to defend Islam or stand up against Islamophobic statements made by friends, teachers or whomever.

When she taught in NYC schools after 9/11, sometimes students would call Muslim kids "terrorists" to harass them, or to just tease the child.

"It was totally common ... it's taken for granted how people joke with them," Noor said.

However, the harassment can escalate.

Sarwat Husain, founding president of the San Antonio chapter of the Council on American-Islamic Relations, or CAIR, a national advocacy group, spends her days fielding calls from San Antonio's Muslims when they or their children face harassment.

"Just in about all cases, each time the Republican debate comes out and the next day you see the reaction in the schools and what the kids are called," Husain said. "Somebody is calling them 'terrorist' or 'go back to your terrorist country' or 'You're here to kill me. Before you kill me, I'll kill you.'" Unfortunately, Husain said, school administration doesn't always respond to these incidents appropriately. "The teachers say 'Oh, kids are kids. You should not take it seriously,'" Husain said, likening the word "terrorist" to racial slurs used against black people. "Your child is called a terrorist and you don't take that seriously?"

Husain said she knows of five families, none of whom will speak to media for fear of retribution at the workplace or in their neighborhoods, that have pulled their children out of schools because of bullying in recent months.

Kim Ridgley, Northside Independent School District director of guidance and counseling, said she didn't know of any particular instances of Islamophobic harassment of students in the district.

However, she said the district tries to be proactive against intolerance, through teaching cross-cultural effectiveness, which is mandated by the Texas Education Agency.

Still, Ridgley noted that whenever there is some big news story — say, the Republican debate — it does trickle down to children and that's something parents should be aware of. 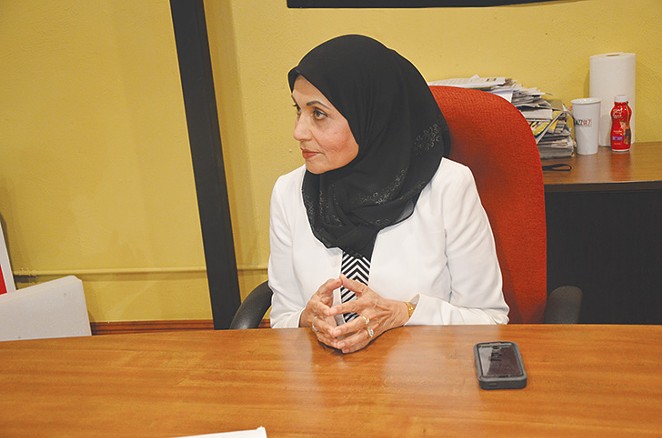 Aside from children in schools dealing with issues much larger than they are, Islamophobic sentiment continues to grow in the United States, and in San Antonio.

In November, 38-year-old Mariano Talavera marched into the Islamic Center of San Antonio with muddy boots that he refused to remove, dragging them over carpets in gender-specific prayer rooms in the mosque. He shouted obscenities and cursed Islam while toting an American flag. He was arrested for trespassing.

While that's just a random act, one of many over the years in San Antonio, the anti-Islam group ACT! for America has also taken root here. That group is founded by a woman named Brigette Gabriel who fancies herself an opponent of extremist Muslims.

The Southern Poverty Law Center — a nonprofit legal center specializing in civil rights — releases an annual list of hate groups functioning across the country. It's the most credible, comprehensive list of hate groups, and any organizations that have "beliefs or practices that attack or malign an entire class of people" make the cut.

Stephen Piggott, a senior research analyst with SPLC who has been researching ACT! for America for the last year, says the national organization will be designated a hate group in about a month.

"The San Antonio chapter, specifically, is one of the most active of the local chapters across the country," Piggott said.

Retired Lt. Col. Roy White, ACT! chapter coordinator in San Antonio, takes issue with the SPLC's definition of a hate group, which he says differs from the FBI's definition, which requires a group to engage in violence (such as arson, murder or vandalism) to earn the label. He says ACT! is not a hate group.

"A true 'hate group' could not have relationships with over 75 active and past Senators/Congressmen as well has hundreds of state legislators who have helped pass laws to ensure American citizen's rights are not being violated and purveyors of terrorism along with those groups who support it are punished under the law," White says in an email.

He also takes issue with CAIR, saying the organization has tried to silence speakers at ACT! for America meetings.

"CAIR and SPLC operate in tandem to put labels on ACT for America in hopes of silencing our voice in telling the truth about Sharia law and the threat of radical Islamic ideology to Muslims and non-Muslims alike," White said.

Clearly, ACT's message resonates with many — there are more than 890 chapters of the organization across the country, and its San Antonio email list has more than 2,000 subscribers. Each meeting regularly draws about 50 people and each year more than 1,200 San Antonio residents attend a chapter meeting, Piggott said.

For some, that's a sign that Islamophobia is stronger than ever. Husain, who has been fielding calls from San Antonio's Muslim community about harassment since that fateful attack at the turn of the century, says she's never seen it as bad as it is now.