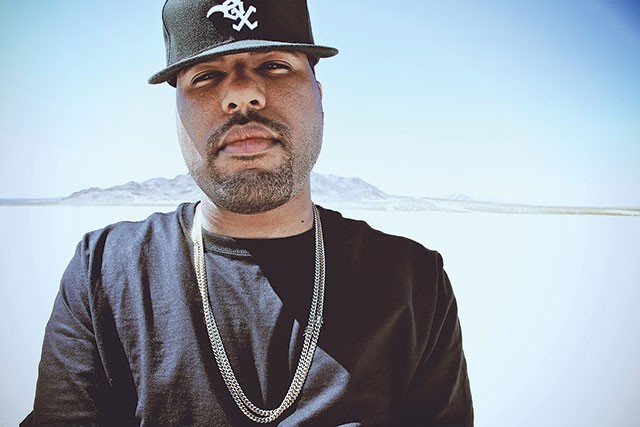 Let’s face it—when people think of our city, hip-hop is not the first thing that comes to mind. It would, however, be unfair to claim that we have no hip-hop scene in San Antonio. From massive touring players (think Ye and Jay) to budding mixtapers, indie hip-hop workhorses, old school legends and a solid if nebulous-as-fuck local set, there’s plenty for area hip-hop heads to do and see. This new monthly column will illuminate hip-hop happenings and profile local and touring acts. Got a show, a mixtape or an album I should know about? Get at me at [email protected].

Get hungry for some JMBLYA Scoremore Shows is once again cookin’ up some delicious JMBLYA to kick summer off properly. The traveling Texas hip-hop and EDM festival, which is slated to stop closer to home this year at New Braunfels Whitewater Amphitheater on May 3, just announced its full lineup last Friday. Scheduled acts include Brooklyn psychedelic rap duo The Underachievers, producer/legend DJ Drama, Norwegian wunderkind cloud-rap soundscaper Cashmere Cat, trap-rap innovator A$AP Ferg, internet superstar Bauuer and Chance the Rapper, whose Acid Rap LP was one of the best hip-hop albums of 2013. Sounds like quite a tasty dish for even the most diverse hip-hop palates. Check jmblya.com for full lineup and special ticket prices.

NIPSEY HUSSLE BRINGS CRENSHAW TO SATX Nipsey Hussle is a rapper who owes his popularity to the Datpiff.com/free digital mixtape era. His braggadocious Cali weed flows are pleasant to listen to, but without the ability to give the music directly to fans for free, Nipsey, like so many others, may not have had a chance to grow on us. Following the solid Marathon mixtapes, Nipsey Hussle released Crenshaw (the name of a major street in South Central LA) last fall. With this mixtape, and perhaps with the album The Victory Lap slated to drop later this year, Nipsey is beginning to show a diversity in style and subject matter that he lacked on previous efforts. Essential track: “Face the World.” Catch him at Backstage Live next Tuesday ($17.50, 7pm 1305 E Houston, (210) 446-7950, backstagelivesa.com).

GO SEE DOM KENNEDY AND GET HOME SAFELY. Ever-rising LA rapper Dom Kennedy has worked with some of the best in the game and can spin a laidback hood narrative with the best of them. His politely named new mixtape, Get Home Safely, brings him to the White Rabbit on Thursday, February 13 ($18-$25, 8pm, 2410 N St. Mary’s, (210) 737-2221, ticketfly.com). Essential Track: “Dreams Don’t Come True.”

LOCAL: ZEUS THE MIGHTY If you haven’t had a chance to cop the recently released effort from Saytown’s happy-go-lucky rapper-in-residence Carlton Zeus, Nine Lives Three Wishes, you owe it to yourself to do so through iTunes or his Bandcamp. It’s a surprisingly deep record with killer production that strongly rewards multiple spins and features some other dope local talent as well. Essential track: first single “Alpha Child.”