Is Alamo Colleges Trying To Address Student And Faculty Complaints? 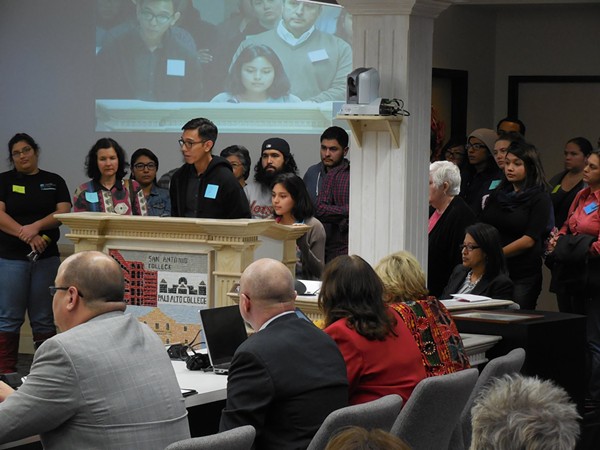 Tension between Alamo Colleges faculty and students with the Board of Trustees and Chancellor Bruce Leslie is continuing to mount.

Complaints range from plummeting morale, scarce administrative accountability and attempts to remove majors, according to staff, faculty and students who are unhappy. Last night, at an open forum, faculty again expressed those criticisms to trustees.

After a fiery March meeting where students, staff and faculty called on Leslie to resign, Michael Flores, president of Palo Alto College, forwarded an email to Leslie that he said would be sent to the college community regarding the meeting.

"Faculty and staff have worked to examine and address issues articulated by several Palo Alto College students and two faculty during the Citizens to be Heard segment at the Alamo Colleges Board of Trustees meeting on Tuesday, March 24," Flores wrote in the email. "We know that each of us seeks to provide a conducive learning environment for each and every one of our 8,400 students."

Flores identified eight themes, which he sought to clarify for faculty and students. Those include campus safety, including Title IX, personal counseling, a women's center, lab and tutoring services, Mexican-American studies, a nurse, cosmetology and student interaction with academic advisors.

"The Alamo Colleges seeks to foster a safe and supportive learning environment for each student and have initiated AlamoCARES, a prevention, education, and support program regarding dating violence, domestic violence, sexual assault, and stalking," he wrote. "This program adheres to the requirements of Title IX and provides resources for students and employees with concerns in these areas."

Noting requests from students for access to personal counseling services, Flores wrote that a committee has been formed to recommend applicants for a full-time personal counselor. There are 15 candidates, according to his email.

To address requests that the school establish a women's center, Flores said a task force will be formed to examine the request.

As for satisfaction with labs and tutoring, Flores said surveys show 68 percent of students were satisfied with computer labs in 2014 while 67 percent thought tutoring services were readily available. Flores said he's asked supervisors to extend hours at the math lab at least twice a week. As for the foreign language lab, Flores said it has 10 desktops that have foreign language software.

"To enhance the student experience, additional desktops will be dedicated to the foreign language hardware," he wrote.

Perhaps one of the sorest points among student and staff, is that an Associate of Arts with a concentration in Mexican-American studies is no longer available at Palo Alto College.

"This program is a recognized field of study and listed in the current Palo Alto College academic catalog, and listed on graduates' diplomas, and listed on a transcript when students complete the specific Field of Study," Flores wrote.

However, Mexican-American courses are still available, according to the email.

"Students could take as many as three Mexican AmericanStudies (sic) field of study courses and have them apply to their associate degree in a different concentration and still include the field of study on their official transcript," Flores wrote. "That fact, plus student interest, has driven the enrollment in these courses."

Another concern students had was the lack of a campus nurse.

"We would like to provide a nurse to provide medical assistance as well as health programming, but we know that a nurse position would be unable to provide direct medical services. Toward that end we are exploring the possibility of partnerships to provide access to health services," he wrote.

And then there's the $1.5 million cosmetology program.

"We wanted to provide accurate information regarding this program," Flores said, explaining that the $1.5 million investment is over a five-year period and will be used for faculty salary, construction, equipment and supplies, with a projected five-year revenue of $1,684,401.

Lastly, Flores addressed complaints from a student and faculty member about the lack of academic advisors and students who report de-personalized experiences.

"Our goal is to always provide intentional and personalized advising for each student from their first experience on campus," Flores wrote, explaining that Palo Alto College's advisor-to-student ratio is 300 to 1. "Additionally, we hired 25 peer advisors to complement professional advisor contracts and further enhance connections. As part of this process, each student has been contacted multiple times (at least two phone calls and give emails each semester) by their academic advisor or peer advisor relative to their program and courses needed."