Is 'Evil Dead' the bloodiest R-rated movie ever? 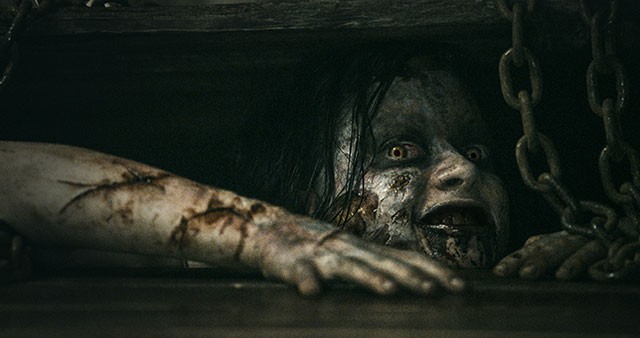 How Evil Dead, the “reinvention” (as Uruguayan first-time director Fede Álvarez likes to call it) of Sam Raimi’s 1981 cult classic The Evil Dead, got away with a mere R rating is perhaps the movie’s greatest mystery. Everything else, in spite of the expected philosophical ramblings on demonic possession, hits you right in your face — especially the blood. Lots of it.

Besides the excessive exchange of fluids and gruesome dismemberments, Evil Dead has enough merit to at least be considered by die-hard fans who consider it sacrilegious to touch the original. Most importantly, Raimi, original producer Rob Tapert, and original on-screen hero Bruce Campbell (“Ash”) all served as producers on the new film, a project that pays its respect, while entering new territory.

This time, everything centers around Mia (a magnificent Jane Levy, not quite Linda Blair in The Exorcist but pretty darn close), even though her brother David (Shiloh Fernández) leads the battle against the demons for long stretches. Unlike the first film, which didn’t explain why Campbell and co. didn’t get the hell out of the cabin as soon as the blood hit the fan, we now have a reason to keep Mia in the house: she’s battling drug addiction cold turkey, and no matter how nutty she gets, her friends swear not to let her leave.

But Eric (Lou Taylor Pucci) knows better; he’s the guy who discovers the Book of the Dead in the basement and soon realizes that Mia will need more than a nurse or sedatives to chill out. You know the rest: once Eric opens the book, all hell breaks lose. But in The Evil Dead you could at least breathe and laugh; this time, the relentless, bloody shock-and-awe and non-stop pace (a la Aliens) keeps the viewer as captive as Mia in the cabin.

Just like Mia, you might beg to leave the woods before the film’s end. Álvarez’s decision to avoid CGI at all costs and stick to prosthetics conjures terror just as well as the latest digital effects, perhaps better. The scene in which a character uses an electric kitchen knife to, er, combat gangrene-like symptoms, will stay with you forever.

This gorgeous-looking and -sounding gore fest extends tributes to terror tales beyond the source film, from Freaks to The Exorcist, The Shining, and even Pulp Fiction. That it succeeds is a direct credit to 35-year-old Álvarez, a new visual master.

The director gained Hollywood’s eye soon after releasing the music video “Ataque de Pánico” (“Panic Attack”), a single by Uruguayan rock band Snake. Made with only $3,000, the piece features a superb-looking extraterrestrial/robot attack on Montevideo. Álvarez posted the complete video (minus Snake) as a short on YouTube. It went viral, and soon after Raimi gave him a multi-million dollar contract to direct a science fiction film. But eventually Raimi realized he had even better plans for the young director.

“When I started to work with him on a different film which we never made, I saw what a great, great, talented individual he was and what a precise storyteller he was,” Raimi said in a press statement. “And I thought, this is the guy I want to tell my ghost story, for the new generation, with pristine sound and picture, on the big screen — seen for the first time, like it was meant to be.”

Needless to say, stay away from Evil Dead if you’re the type that covers your eyes during the scary bits— it is probably the most violent and repulsive R-rated film ever made. But if you don’t mind some splatter, this is one clever way to do it.

“I don’t want to become the devil’s bitch,” says one character towards the end of the irresistibly over-the-top carnage. Then it clicked: we’re all the devil’s bitches for sitting there for 90 minutes, being raped by Satan.

Is it scary? Yeah, at times, like most good horror films. But the reason Evil Dead works is because it’s well made — and bloody fun.

Warning: this video contains graphic images which some may find disturbing.