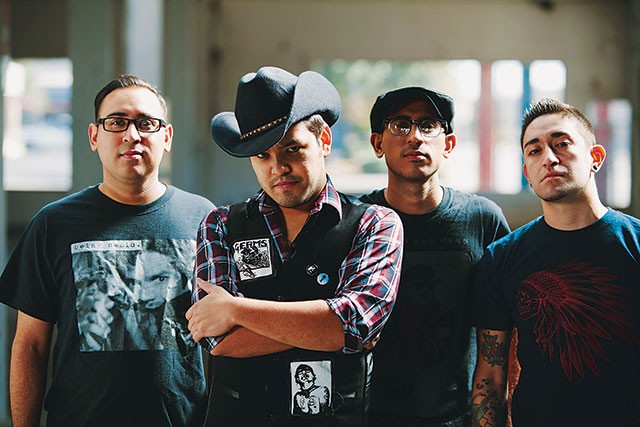 “It might get a bit loud,” Álvaro del Norte tells me, as I proceed to sit in the middle of Piñata Protest’s 8 x 10 rehearsal space at a secret storage room somewhere in the city (don’t ask). It’s Sunday, but the band doesn’t stop.

“You’re in the middle of the storm now,” the singer/accordionist tells me. He’s sporting a Rev. Horton Heat T-shirt. Drummer J. J. Martínez has his arms covered with tattoos (from my position I can only identify the Virgin of Guadalupe); bassist Marcus Cazares has a Voodoo Glow Skulls T-shirt; there’s framed Mexican lotería pictures on the floor and, on the wall, the song list for El Valiente, the new album Piñata Protest will debut Friday at the White Rabbit. When they start playing the waltz-like “Tomorrow, Today” (one of the EP’s key tracks), I have a sudden realization: there’s actually two Piñata Protests.

“This is the best lineup we ever had,” says del Norte, “and probably the last.” He smiles and looks at the others, who smile nervously. But unlike the wild, loud, spontaneous combustion of a Piñata Protest concert, these guys are all business: extremely focused “organized mayhem,” the sound of four guys who’ve been through these songs countless times.

“That’s why we were able to record the album in three days,” says del Norte about El Valiente, produced in Austin by Chris “Frenchie” Smith. “By the time we got to the studio, we got it pretty much down.”

“We weren’t very happy with the original recording, the sound and the feeling,” said del Norte. “The band was going through some rocky times.”

“Yeah, it needed an update,” said drummer J. J. Martínez, the other survivor of both Plethora sessions.

El Valiente (“The Brave”) is the perfect title for an album that came to life through sheer relentlessness. Due to what del Norte attributes to “substance abuse” and “fights within the band,” Plethora Reloaded could’ve been the end of the quartet.

“But this time everybody is solid and everyone wants the same thing,” he says. “I see [El Valiente] as a first step. It’s a transitional album, but we’ll never change our core sound.”

It took two drummers, two guitarists and four bass players for Piñata to finally be at peace with itself and now they’re ready to take no prisoners. So are Saustex Media and L.A.’s Cósmica Records, which jointly released the album on May 21. SA’s Saustex, the primary label, will handle the physical release while Cósmica (a leading Latin alternative label and management firm with red-hot indie songstress Carla Morrison on board) will take care of the digital and the Latin market, including Mexico.

But the other key member of the new Team Piñata is manager Faith Radle, the person who helped turn Girl in a Coma into a full-fledged international act.

“The band is really ready to make a break and I think this will be the album to do it,” Radle told the Current via email.  She’s been working with the band for about nine months, and the results are there: a solid new album, successful showcases at South by Southwest, and favorable NPR coverage.

The band’s ready and confident, alright, but they’re not stupid; as crazy as they may seem onstage, off of it they’re careful and disciplined — they know they can’t blow this one and won’t jump in the pool unless they know there’s water in it.

“We’re not just going to give up everything and expose ourselves to coming back to nothing,” said Martínez. “But at the same time we don’t want to one day say, ‘What if we had taken that chance?’ So we’re just waiting. We’ll see.”

While all members of the band grew up with Mexican norteñas and SA conjunto, everyone credits del Norte with having the idea for Piñata’s sound. Paradoxically, he was the last one to fully embrace his Mexican/Tex-Mex roots. He studied accordion with Juan Tejeda and Eva Ybarra, but then left for Austin “to find myself” while working as a meat clerk at Fiesta. His co-workers were blasting norteñas all day long (the really hardcore ones from south of the border), and del Norte realized he kind of liked it. Then it clicked.

“I was playing in a lot of bands that sounded like everybody else and I wanted to try something different,” said del Norte. “The only thing I could think of is combining my newfound appreciation of norteño with Tex-Mex and punk rock.”

All throughout El Valiente you hear that punk rock/roots music existential tension, both musically and in the lyrics. But, this time, the band sounds proud and convinced: they’re conjunto punketos, and chinga tu madre if you don’t like it (the “chinga tu madre” is uttered with a smile, though).

“We matured as a band and are getting closer and closer to finding our own sound,” said del Norte.

But El Valiente isn’t just a blend of styles: it’s an organic two-world hybrid that even surprises in crowd-pleasing “Volver, Volver” (a Westside blues that may very well be the quintessential punk cover of the classic Mexican song); when the song explodes, Martínez isn’t just doing the usual oompah-oompah polka snare. It’s wild, but precise.

“One of the biggest joys of the album and this band is how they transform everyone’s favorite ranchera song into an over-the-top punk rave-up that makes me want to stage-dive into a pit of cowboy hats and big belt buckles,” wrote Félix Contreras in the NPR First Listen feature of El Valiente.

Even popular classic “La Cucaracha” gets the Piñata treatment.

The album starts with a short, irresistibly corny intro a la XEG La Ranchera de Monterrey (Mexico’s top norteña station), where the band is announced as “los más chingones” (“the baddest motherfuckers”), and ends with “Qué pedo,” a sort of fierce declaration of principles in rudimentary Spanish that could be translated as “WTF?!”

“No quiero/qué pedo/cambiarme/no puedo/mi vida/perdida/destino/deseo” (“I can’t/qué pedo/change/my life/lost/destiny/I wish”). It is a fast-driving cry for help that reflects del Norte’s (and the band’s) personal struggle to do what they want while accepting (and at times, rejecting) the way they were brought up. As he sings on “Life on the Border”:

“Vivo dos vidas [I live two lives], my life’s a duet/dissonate melodies blasting all inside of my head/saying ‘you can’t stay, you should go/Your words are deceiving/your cover is blown.’”

“It’s all about finding who you are,” del Norte said. “Personally, I’ve always been searching, and I’m not going to stop now.”