Is Wild Party the next great SA band? 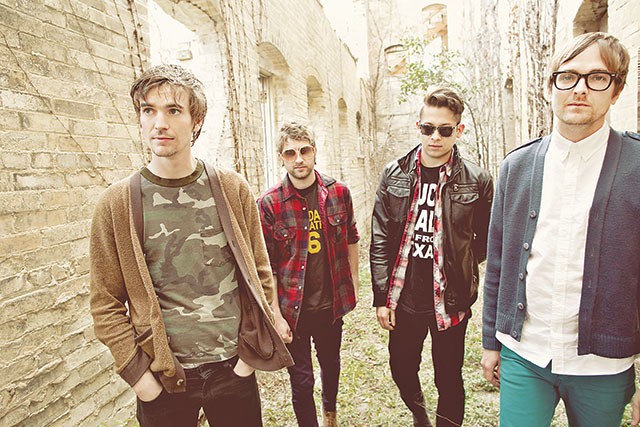 As booking agent for Twin Productions, Erica Vigliante can really only keep her eye on the national scene. To her surprise, it took an out-of-town friend to hip her to an up-and-coming act from just down the street.

“I was approached by an agent out of New York,” Vigliante told the Current. “He said, ‘These guys are from this neck of the woods, have you heard them?’ I listened to it, and I absolutely fell in love.”

That band? SA’s own Wild Party, who, on the strength of a handful of songs and a slick homemade video, have already slipped onto the radar of some of the country’s top labels. The pop-rock quartet still remains unsigned, but with a showcase at Limelight (presenting their All Nighter EP), they’re clearly aiming for a wild coming out party. Not that the band is a new act, exactly.

“We first got together around 2009,” said Wild Party lead singer Lincoln Kreifels. “Back then it was just [guitarist Lucas Hughes] and me playing together as a duo. We cut our first song shortly after.”

A U.K. tour supporting the Wombats soon followed, some air-time on Britain’s xFM broadcast, and then, well, not much.

“We weren’t really making any money with the music,” said Kreifels. “Nothing was really building, because we hadn’t released an album. So we had to really pursue our careers.”

Following a nearly two-year hiatus, the band — now built to a four-piece with the help of brother Jake Kreifels on bass and Ethan Kaufmann on drums — regrouped and reconsidered their approach. Rather than work the touring circuit, the band put their energy towards online exposure, releasing the album Phantom Pop through iTunes and putting together a video for lead single “When I Get Older.” That album quickly cracked iTunes’ Top 100 downloads chart as the video continued to rack up hits.

Wild Party’s infectious sound certainly helped endear them to a wide swath of listeners; Vigliante believes the band has an X-factor that sets them apart from similar pop-rock acts.

“People have told me, ‘oh they sound like something along the lines of Imagine Dragons, or the Lumineers,’ but I think there’s something special and fresh about them,” she said. “Everything new they send me, I’m just amazed at how good it is.”

As for his own definition of the Wild Party sound, Kreifels prefers “face-melting pop music.” And it’s playing live, he claims, where the band seeks to shine. “I try to be as wild as possible and live up to the name.”

While momentum seems to be building, Kreifels appears to keep his expectations realistic.

“We’re playing as much as possible for the time being and hoping that we get something of interest with this show in San Antonio.”

He may be understating a tad.

“They’re very laid back about it, but this is definitely a big deal for these guys,” said Vigliante. “There are multiple labels that are flying in to see this band. There are already offers on the table for them. Not sure if they’re in bidding wars yet, but the industry is talking.”

For his part, Kreifels seems excited by whatever prospect the future may hold.

“I just want to share our music with the world, go on tour with great bands, meet cool people, make music for a living, doing what I love most. Whatever that entails, I’ll enjoy it.”