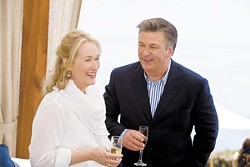 
Writer-director Nancy Meyers specializes in the postmenopausal romantic comedy, in which a 50-ish woman, living in a gorgeous home, revives her flagging sexuality via an awkward liaison with an inappropriate man. In Something’s Gotta Give, Diane Keaton’s uptight authoress succumbs to the charms of Jack Nicholson’s potbellied Lothario, who learned — as all men must in Meyers’s movies — that older women are better than those young things they’ve been chasing. The signature Meyers moment is one of profound sexual embarrassment, like when houseguest Nicholson accidentally walks in on a naked Keaton. Meyers’s latest, It’s Complicated, follows the basic outline, but is subtler and more successful. She takes the autumn-romance template, casts it with top talent, soft-pedals the slapstick, and creates an audience-pleasing “sex-with-your-ex” romp. Meryl Streep plays Jane, divorced for 10 years, which she’s spent rebuilding her life, opening a bakery, and planning an addition to her beautiful house (see above). Her nest now empty, Jane confides to her obligatory girlfriend circle (Mary Kay Place, Rita Wilson, Alexandra Wentworth) that she hasn’t dated in years.

On a New York trip for her son’s graduation, she has drunken sex with her once-loathed ex, philandering Jake (Baldwin), now married to Agness (Bell), a petulant, fertility-obsessed shrew who insists Jake help raise her bratty tot. Jane and Jake start an affair, and Jake falls “back in love,” pining for the family he left behind. Jane glows, then frets, feeling naughty and excited, until she realizes that “other woman” might not be a suitable role, especially when a real suitor, architect Adam (Martin), is waiting in the wings. (The “Meyers moment” occurs when Jake sends his paunchy naked webcam image to the wrong person.) Superb casting and a solid script make the movie a considerable improvement over Meyers’s previous efforts. Streep, freed from impersonating a nun or Julia Child, is natural and winning. Baldwin, playing an ox-like narcissist, displays an endearing vulnerability. Martin is funny and touching in the stock nice-guy role, and John Krasinski has some amusingly awkward moments as Jane’s future son-in-law, who accidentally becomes privy to the affair. — Pamela Zoslov