It's Not Easy Being a Politically Opposed Couple, Especially This Election 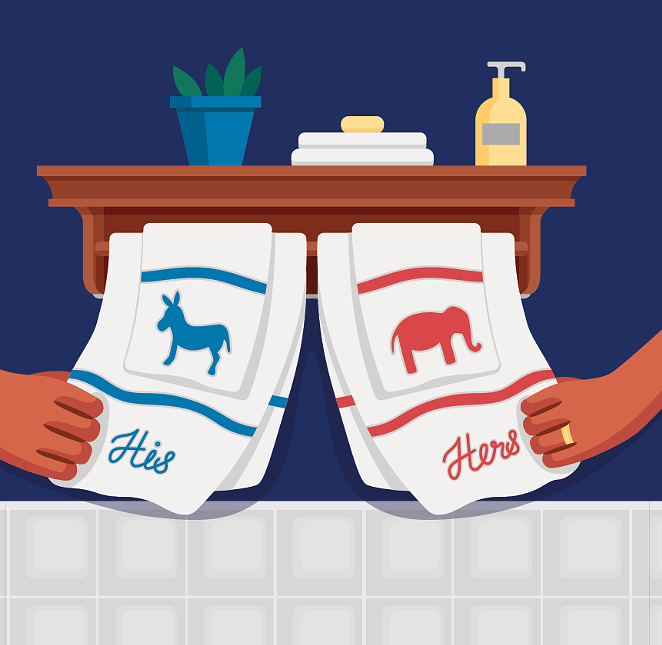 Early one morning last month, Ryan Parsons was driving to his job as a cook at a Boerne restaurant when he saw flashing lights in his rearview mirror. Assuming a police officer was pulling him over, the 37-year-old switched lanes before noticing it was just a guy in a truck tailgating him on the highway. As the truck sped past him, Ryan says the man started yelling out the window and brandished a handgun. Naturally, the encounter deeply upset the self-identified liberal gun-reform advocate.

When Ryan returned home that afternoon, he told his wife Lauren, 27, about the incident. Her response: “Well, the gun wasn’t pointing itself at you, was it?”

Ryan and his conservative, Second Amendment-loving wife are ideologically opposed on a number of fronts, like abortion (she’s pro-life, he’s pro-choice) or the Affordable Care Act (she hates Obamacare, he backs it). When civil unrest broke out on the streets of Ferguson, Missouri in 2014 after Michael Brown, an unarmed black teenager, was shot to death by a white police officer, Lauren thought the military should intervene and declare martial law. Ryan called her a racist for the day.

Then there’s this year’s presidential election, a race many pundits keep calling one of the most divisive ever. It’s been a polarizing one at the Parsons household with Ryan, a lifelong Democrat, supporting former U.S. Secretary of State Hillary Clinton while Lauren, a staunch Republican, says she’ll vote for real estate mogul and former reality TV star turned GOP nominee Donald Trump.

While opposites might attract, such inter-political marriages aren’t exactly all that common. One 2016 survey by the statistics and polling website FiveThirtyEight.com found that only 10 percent of married couples consist of Democrat-Republican pairs. That might be because, for most people, political ideology is a key part of their identity. When couples like the Parsons marry, they have to find a way to operate around their disagreements and connect at a core level.

“If your spouse is not agreeing with you, part of your brain could be going, ‘Wait, they don’t even know who I am. They’re rejecting something that is a part of me,’” said Dr. Becky Davenport, owner and director of San Antonio-based Institute for Couple and Family Enhancement. “Maintaining the quality of the relationship has to be the priority over political theater.”

Ryan and Lauren have been married for a year and a half. When they started dating in 2013, politics never came up in their conversations, so neither really knew how different they were from one another until the 2016 election season got underway. Most of the jabs they took at each other came via comments on social media. In July, when Lauren posted “#Trump2016” on Facebook, Ryan responded by posting a poop emoji and calling Trump supporters idiots.

“I think this election season has been a shock to both of us,” said Lauren, a U.S. Army veteran who works in oil field logistics. “We try not to argue about it when we’re out, but sometimes we do. But we usually keep it online.”

Even then, Ryan does his best not to debate the issues on social media – especially, he says, since Lauren’s confrontational enough, regularly posting pro-Trump stories and anti-Clinton memes just to get a rise out of people. Both can usually guess how the other feels about a certain trending topic and what kind of argument they might have about it before they even get home from work.

“I told her she needed to lay off the political shit on Facebook,” Ryan said. “She did…for about a week.”

Despite their squabbles, the Parsons say they don’t want to let their clashing political views prevent them from enjoying their relationship. November will come and go, Lauren says, and life will go on.

“I love him very much,” she said. “He’s been there for me through a lot of stuff in our few years together, so these political differences are nothing to us. It doesn’t dictate our marriage.”

Ryan interjected, half-jokingly: “But it may dictate the day.”

Engaged to be married, Ana Alicia Perez, a social worker, and Jeromy Aldridge, a Navy veteran and insurance agency owner, knew exactly what they were getting themselves into when they let their political bickering on Facebook evolve into online flirting. When they finally connected on the social-media website, Ana knew right away she “hated his guts.”

“I read through his profile and saw he was a conservative and was like, ‘Eww,’” Ana, 33, told the Current in an interview at the couple’s “Bipartisan Bungalow,” the nickname she and Jeromy gave their home on the city’s northwest side. “He would post things just to piss me off. We were mortal enemies.”

This election, Ana, a Democrat, is voting for Clinton, while Jeromy, a Republican, is voting for Libertarian candidate Gary Johnson. He says he just can’t vote for his party’s nominee this time around because Trump has a long history of “taking advantage of the little guy.”

While they dated, Ana, an active member of the San Antonio chapter of the National Organization of Women and Stonewall Democrats of San Antonio, says she was excited to share with Jeromy some of the things that were important to her — like advocating for LGBT rights. Jeromy had always been indifferent about the issue.

“I had never been vocal about the LGBT community at all,” Jeromy, 38, said. “I was more of a whatever-floats-your-boat-kind-of-guy. But being with Ana has showed me how a lot of the rhetoric and diatribe from people on the right is wrong.”

Such agreement between the two, however, is unusual. More often than not, the two litigate their positions like courtroom rivals on everything from labor unions and welfare programs to climate change and mental health services. Ana admits she’ll sleep in another room when the debate gets too heated. Disputes notwithstanding, they’re both still looking forward to their politically-themed wedding late next year that will host guests split down partisan lines, including “boring business people” and “hippies and drag queens.”

“Love trumps everything,” Jeromy said. “We are both passionate people. We may say things to get under each other’s skin, but at the end of the day we try not to go to bed angry—at least I do.”

Celeste and Dave Tidwell hope they don’t kill each other before Election Day. Happily married for 16 years, their support for different presidential candidates this year has ratcheted up the friction.

“Right now, it’s his goal is to make me miserable,” Celeste, 48, told the Current. “All the information and numbers he gives me come from ghostly graphs he conjures up in his head. He’s always wrong.”

Seated next to each other at their dining room table, Celeste, a stay-at-home-mom who ran unsuccessfully in 2013 and 2015 for San Antonio’s District 10 City Council seat, and Dave, a prison contractor who wants to see Trump in the White House, start to raise their voices when politics comes up. Portland, their 16-year-old daughter, just sits in the living room watching TV as the conversation gets more and more intense.

“Our ethics and values are not the same,” Dave, 48, said. “It creates problems because the children get confused as to what they should be doing.”

Determined that his kids learn accountability and responsibility, Dave preaches autonomy whenever he can. He believes following his conservative principles will put them on a path to a better life. Celeste shoots daggers from her eyes, accusing Dave of brainwashing their 12-year-old son.

“I think the biggest problem I have is that he tends to stereotype everyone,” Celeste said. “It’s offensive when he tells the kids that all liberals want is a handout, so I have to correct it.”

Still, Dave admits he doesn’t want his wife to change. Even if he could snap his fingers and turn Celeste into a Republican, he wouldn’t do it.

“I love her for who she is and I like the fight,” he said. “We’re two very strong people. I’m never going to change her mind, but that’s OK.”

As the interview winds down, Portland walks over to the table. She’s used to her parents arguing when touchy subjects like immigration reform come up or when she tattles on her dad because he’s watching Fox News, but she takes it all in stride.

“Just to let you know,” she says smiling, “I’m a Bernie supporter.”