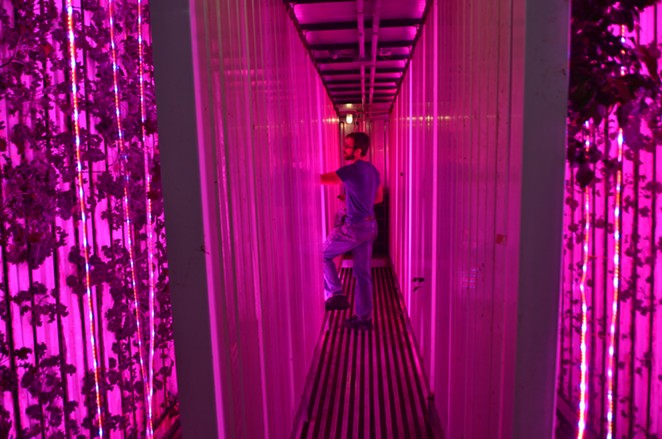 The 27-year-old’s first deep exposure to the complexities of food scarcity came while he was a student debater at Trinity University. As the school’s team researched climate change, he realized how close humanity had pushed our planet to the brink.

“I think agriculture is broken, but I knew I wanted to be a part of the solution,” Hagney said.

To that end, he worked on farms across the United States and Costa Rica before returning to San Antonio in 2013 and convincing Rackspace founder Pat Condon to back a business venture dedicated to sustainable production.

Hagney launched his indoor farm, Local Sprout, in an East Side warehouse and consulted with other businesses on hydroponic gardening. However, in 2015, after realizing he do more with the 16,000-foot space, he opened it to other likeminded entrepreneurs.

Since then, Local Sprout has expanded into what Hagney calls a “food hub,” leasing space to other sustainability-focused culinary startups. He sees the project as a way to help small ventures take root, much in the way tech startups do in Silicon Valley business incubators.

“These companies are all sustainably sourcing, but they needed a place to develop food products,” Hagney said.

A dozen local food producers, entrepreneurs and businesses now operate in the warehouse, which holds city permits for food manufacturing. Together, they’re leading a shift from an outdated business mindset of competition to one of collaboration, Hagney said.

“We wouldn’t be the company we are without Local Sprout,” said Diana Anderson, co-owner of JD’S Chili Parlor, a tenant. “Mitch has helped to connect us with local ranchers, the comradery has helped us grow and reach out to the community, and the hub has inspired us to be more conscious of sustainability.”

As with any business, there have been setbacks along the way.

But with one tenant, Pulp Coffee, expected to open up retail space inside the warehouse later this year, Hagney expects his project to gain more exposure to local foodies. There’s also space for two additional tenants, including parking spaces for food trucks if those are part of their plans.

Since transforming Local Sprout, food production has become a secondary focus for Hagney. Even so, he grows and harvests around 30 pounds of kale each week onsite. He also builds herb- and produce-growing gardens for local restaurants, including Hoppy Monk and The Maverick Texas Brasserie.

“Local Sprout is unlike any other local food production hub that we have; I don’t know that San Antonio has many other opportunities for businesses to become part of a larger food community or operate in the center of the city,” said Eco Centro Manager Cecile Parrish.

“Local Sprout is a contingent of the city that is pushing for value-added products, and that’s how we’ll ultimately grow food access,” she said.

While Local Sprout’s East Side food hub isn’t yet open to the public, local foodies are probably familiar with at least some of its dozen tenants, which range from local food truck and caterer Berbere Ethiopian Cuisine to Brushfire Farms, a producer of award-winning chili-pepper jams.

What follows is rundown of businesses now operating out of Local Sprout:

Pulp Coffee
James Mireles and Liza Moreno launched Pulp Coffee in 2016, and since then, the couple has since helped raise local coffee standards through wholesale services, popup events and hosting brewing and roasting experiences at restaurants. The pair attribute a growing demand for high-quality coffee to out-of-state transplants relocating to Texas, but the upgrade benefits everyone, especially the consumer. Pulp will open a new café and retail space with public hours inside Local Sprout in late 2019. The space will allow visitors to sample varieties of high-quality coffees and teas, chat with baristas, get a glimpse of the high-tech yet personalized coffee-making process and learn more about the other small businesses located at the hub. Also on the horizon for the couple is Blüm Coffee & Tea, a separate business slated to open later this month.

Guerilla Gourmet
For Chef James Canter, great food allows people to experience different cultures without a passport. The chef previously brought his food to Victoria, Texas, serving comforting hot meals to the community during good and bad times — especially for families affected by Hurricane Harvey in 2017. Canter relocated to San Antonio in late 2017, and currently offers his talents to the kitchen at rooftop bar Paramour, specializing in bites like tikka masala meatballs, baby lobster rolls and shredded duck street tacos.

Hidden Treasures
Heather Chavez launched her food truck in 2018, offering tasty and freshly prepared brunch and beverage options. The veteran-owned business is a regular at regional food truck events, but Chavez, a graduate of St. Philips’ hospitality program, specializes in sweet pastries, muffins, and savory sandwiches for private events and business functions. She’s currently studying Restaurant Management with the University of Houston, with plans to graduate in late 2019.

Rice Rise
Rice pudding is a beloved dessert for families across the world, and by developing a vegan-friendly and lactose-free version, Asad Siddiqui has created a variety anyone can enjoy. Rice Rise puddings are made with basmati long grain rice, non-GMO natural sugar and cardamom, and served in an eco-friendly container. The result is a delicious dessert that can be offered with flavorings such as pistachio cream with Belgium dark chocolate, vegan vanilla hazelnut and English cream with fudge. Rice Rise sells its products at local farmers markets.

JD’s Chili Parlor
Inspired by San Antonio’s historic Chili Queens, John and Diana Anderson — the husband-and-wife team behind JD’s Chili Parlor — took years to perfect their chili paste, which allows home cooks to recreate authentic chili at home. Using fresh peppers and premium ingredients, they also developed a line of enchilada sauces and fixin’ options, all with grass-fed meat. JD’s is a regular at local farmers markets, serving dishes such as its double-red vegan chili and whiskey chili in a hash brown bowl.

Madge’s Food Company
Mike Miller missed his grandma Madge’s homemade tomato jam and pickles so much he decided to recreate them himself. He worked tirelessly with his wife, Jody, to develop the perfect jam and pickles, which he released in 2014. Since then, Miller has expanded the lineup to include flavorful foods such as spicy vegan kim chi, as well as jams, sauerkraut and a spicy Bloody Mary mix. Madge’s products are available online and in stores including Revolucion and Central Market.

Berbere Ethiopian Cuisine
At 15, Cherinet Girma migrated to the U.S. with his older siblings and grew to miss the authentic flavors and dishes his family prepared in Ethiopia. Initially, the duty of replicating those flavors fell on his shoulders. “Once my mother arrived, I stopped cooking for us, but I paid attention and would help in the kitchen,” he said. Girma opened his food truck in 2016, bringing those same robust flavors of Ethiopia to familiar San Antonio dishes such as lamb tacos, veggie bowls and savory rice. Berbere has also expanded into catering for private events doing popups at local markets and events.

Lil’ Red’s Boiled Peanuts
Boiled peanuts are often considered a Southern treat, but the versatile, antioxidant-filled legume is celebrated in cuisines across the globe. Mike McAndrew decided to introduce a new generation of snackers to boiled peanuts and launched his own line, available — along with dipping sauces — both wholesale and at local farmers markets. The brand can currently be found at retailers including Royal Blue Grocery and Groomer’s.

Pickled SA
Somer Baburek was pregnant and fighting powerful pickle cravings when she decided to experiment with pickle-making herself. Nearly seven years later, Baburek has developed an impressive line of pickled ingredients including carrots, cauliflower, cucumbers and beets — available in flavors like garlic dill, bread and butter, and sweet and spicy — that can be ordered online, found at local farmers markets or on the snack menu at High Street Wine. Pickled SA and Interstellar Farms recently collaborated to create healthy to-go meal options, which are slated to roll out this month.

Brushfire Farms
Using the flavorful chile pequin plants surrounding his South Texas home, James Vives developed the sweet-meets-heat Brushfire Farm jams, which can be enjoyed with anything from crackers to BBQ. The jams have been recognized at international competitions including the Good Food Awards and are a favorite among local chefs. The company recently moved into Local Sprout to expand manufacturing operations and supply products to Smoke Shack, Cooper’s Meat Market, Larder at Hotel Emma and Central Market.