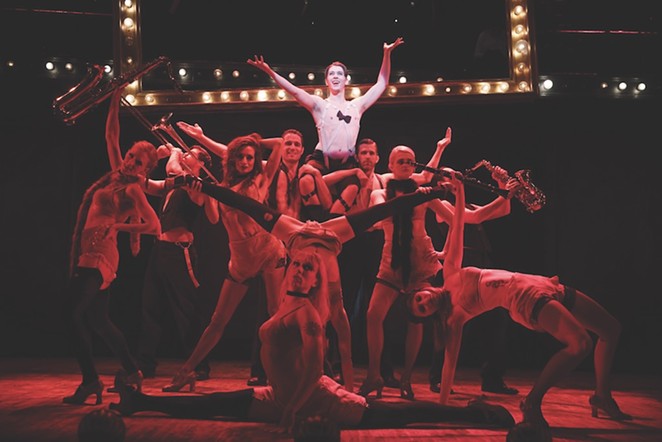 Gone are the days when entertainment on your perfect day meant a paleta by the television set. Now, with a rapidly growing arts scene and more tourists to entertain than ever, when the sun goes down on the Alamo, the curtains must come up on stages across this destination city. From a steady rotation of high-profile touring acts to homegrown entertainment, there's something to be found almost any night of the week. So grab a ticket and cozy up to world-class theater, dance and music at any of these local venues.

From Diana Ross to Bob Dylan, The Majestic Theatre has hosted some of the biggest names in music. This former movie theater turned national historic landmark is now home to the Broadway in San Antonio series, presenting the hottest touring productions of New York's award-winning shows. 224 E. Houston St., (210) 226-3333, majesticempire.com.

Once a vaudeville hall, the Charline McCombs Empire Theatre also enjoyed a stint as a B-movie theater before it was shuttered back in 1978. Redeveloped alongside the Majestic back in the '90s, thanks to funds raised by the Las Casas Foundation, the intimate theater now hosts comedians, concerts, local performances and private events in its flexible seating space. 226 N. St. Mary's St., (210) 226-3333, majesticempire.com.

With a revolving door of touring acts and three spaces to house them, the state-of-the-art Tobin Center for the Performing Arts is the place to find anything from Tupperware-toting drag performers to master puppeteers direct from Italy to Chaka Khan, just off the River Walk. And with 10 companies in residence, including Opera San Antonio, Ballet San Antonio and the San Antonio Symphony, the stage is sure to sizzle with some of the best local talent the city has to offer. 100 Auditorium Circle, (210) 223-8624, tobincenter.org.

Since 1992, ARTS San Antonio has brought the finest performances from around the world to various venues around town. But the artistic impact doesn't end at the close of the performance; the organization also works to coordinate education and outreach opportunities for community engagement with visiting artists. Future events include Cirque Mechanics' Pedal Punk, a steampunk circus spectacle where cycling is the only escape from a techno-driven world. 418 10th St., (210) 226-2891, artssa.org.

Originally housed in Trinity University's Attic Theatre, AtticRep found a new home for its esoteric, challenging dramas when it became one of the 10 resident companies at the Tobin back in 2014. There's no such thing as an easy night with these guys; with a mission to "challenge the creative imagination of our community," expect to leave the theater thinking. Previous productions include The Amish Project, a play about forgiveness in the wake of an unthinkable school shooting. 100 Auditorium Circle, (210) 223-8624, atticrep.org.

Do you like your plays to stick to the dramatic canon? If so, the Classic Theatre of San Antonio's productions of popular classics and forgotten masterpieces is the space where you can let your theater geek flag fly. All performances include a free educator preview night where education professionals can drink wine and eat appetizers while receiving credit for the event. And remember, teachers aren't the only ones that get to have fun around here; Thursday nights are reserved as education nights, and you'll find students of all ages in the audience of these late-night fieldtrips that include a talk back with the cast and crew. 1924 Fredericksburg Road, (210) 589-8450, classictheatre.org.

For over 75 years, the Carver Community Cultural Center has welcomed groundbreaking performers like Esperanza Spalding and Poncho Sanchez into its cultural hub on the East Side of the city. Through challenging performance, community outreach and education, the Carver seeks to celebrate diversity with an emphasis on African-American heritage with its namesake George Washington Carver's words always in mind: "Start where you are with what you have. Make something of it. Never be satisfied." 226 N. Hackberry, (210) 207-7211, thecarver.org.

For quality fun for the whole family, visit The Woodlawn Theatre for popular toe-tapping musicals that will leave you singing in the shower for days. Previous productions include the unbelievable flying antics of Mary Poppins and the notorious Halloween run of The Rocky Horror Show starring reality stars from RuPaul's Drag Race. And for trivia buffs: originally a movie theater designed by architect John Eberson (of Majestic fame), John Wayne hosted the world premiere The Alamo at The Woodlawn back in 1960. 1920 Fredericksburg Road, (210) 267-8388, woodlawntheatre.org.

If you're into the unconventional, then The Overtime should be your jam. Voted Best Local Theater Company by San Antonio Current readers six years in a row, Overtime is dedicated to new and original (and often unusual) works written primarily by local playwrights. Constantly growing in popularity, the company received 994 submissions from 40 states and 15 countries for its 2016 season. Expect to find monsters, Martians, dog-food-eating humans, serialized performances and more on either of the two stages in their convenient location near the Pearl and the River Walk. 1203 Camden St., (210) 557-7562, theovertimetheater.org.

If your preference errs on the conventional side, The Playhouse offers quality live theater that seeks to "reveal the truth in the human experience." And thousands of thespians have attempted to do just that since its founding way back in 1912 as San Antonio Little Theatre. Today, The Playhouse hosts two stages: the Russell Hill Rogers Theater for larger musicals and the Cellar theater for intimate dramas, comedies and experimental works. Plus, The Playhouse is the only destination for Senior Theatre, an eight-week program that pairs senior citizens with master teaching artists as they develop a one-day showcase performance. 800 West Ashby Pl., (210) 733-7258, theplayhousesa.org.

To step into the Cameo Theatre is to step into another time. With deep burgundy walls and gilt columns, the Egyptian art Deco space was a vaudeville stage and a movie screen before its resurgence as a multifunctional performance space. In its heyday, you'd find Louis Armstrong or Fats Domino on stage. Today, expect locally produced family-friendly musicals such as Annie or The Buddy Holly Story. 1123 E. Commerce St., (210) 325-8702, cameocenter.com.