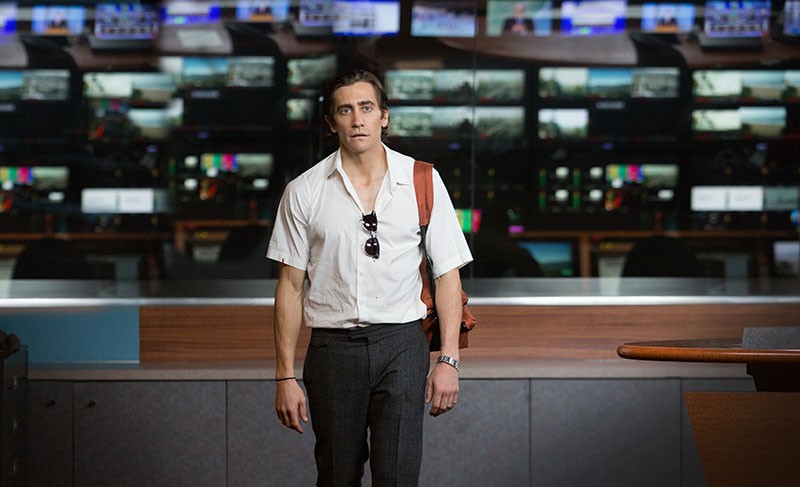 In the pitch-black satire Nightcrawler, director Dan Gilroy captures the cult of the American entrepreneur in all its amoral, sociopathological glory. It comes in the guise of Lou Bloom (Jake Gyllenhaal), an intensely buggy mouthpiece for our current obsession with self-actualization through capitalism.

When we meet Lou he's stealing chain link fence and manhole covers for scrap. He lives alone, has no family and reveals absolutely nothing about his past. What he does show, however, is an insatiable desire to "expand to the next level," peppering every conversation with business class aphorisms and can-do slogans. One night, while stopping to watch a freeway accident, he encounters freelance cameraman Joe Loder (Bill Paxton), a bottom feeder who films the aftermath of car crashes, fires, home invasions and street crimes that fill L.A. local news.

Lou immediately sees possibilities. Armed with a beater car, police scanner and cheap camera, he eagerly chases tragedies, capturing the nightly carnage. Unfettered from ethics and morality, or any sense of humanity really, he eagerly crosses the line to get the kind of disturbing images Nina Romina (Rene Russo), an overnight segment producer at a low-rated TV station, craves. Soon Lou's graduated to a new Dodge Challenger, top of the line equipment and a gullible 'intern,' a homeless man named Rick (Riz Ahmed), whom he happily exploits.

Things come to a head when Lou arrives at a home invasion before the police and films a brutal triple homicide—including the faces of the perpetrators. Withholding that footage from the cops, he turns his fortuitous timing into a career-changing scheme.

Gilroy has concocted Nightcrawler as an action-packed, somewhat updated version (social media doesn't seem to exist) of Network, offering a cynical and scathing condemnation of media companies while making it clear that videos—maybe even filmmakers—have inured us to the pain and suffering that accompanies murder, death and disaster. Lou Bloom is a distinctly American monster, one that sees financial achievement as the celebrated end that justifies the means.

Unfortunately, Gilroy's portrait isn't particularly probative or original. While Taxi Driver is a clear influence (there's even an allusion to De Niro's mirror scene), Lou doesn't develop into an opportunistic and relentlessly ruthless go-getter, he starts out that way. And while modern media happily offers him a career ladder to climb, little attention is paid to why he is so readily rewarded.

Gilroy's choice to focus on local television allows him to viciously critique the fear-mongering and callous money-chasing that news media indulges in but limits his scope. The bigger and better target might have been the embrace of unbridled, amoral can-do capitalism, the Ayn Randian perversion of the American Dream that conservatives like Rand Paul and Paul Ryan seem to hold dear. As Lou ably demonstrates, our system encourages him to become profit-seeking vampire. Too bad Gilroy never bothers to ask why we make it so easy for him to feed.

At least Gyllenhaal's reptilian, perversely charismatic performance clues us into how deeply the pathology goes. The actor's eyes are Nightcrawler's best visual effect, unblinking in their feral madness and piercing in their determination. Lou is an irony-free creation, a self-made man who feigns warmth when it serves him but has ghoulishly embraced Darwin's notion that survival is entitled to the fittest. It's the kind of dark and uncompromising portrait that earns Oscar nominations but is too unsettling to actually win. After all, what would Hollywood be saying about itself if it rewarded such an unnerving portrayal?

"I work for myself" is the way Lou introduces himself to Nina and that phrase reveals everything you need to know about the man. Nightcrawler is Gilroy's relentless and cynical expression of that confession, a slick and nightmarish descent into a world where corporate justice rewards those who do whatever it takes to get ahead. It's more than fitting that this horror show of American capitalism opened on Halloween.