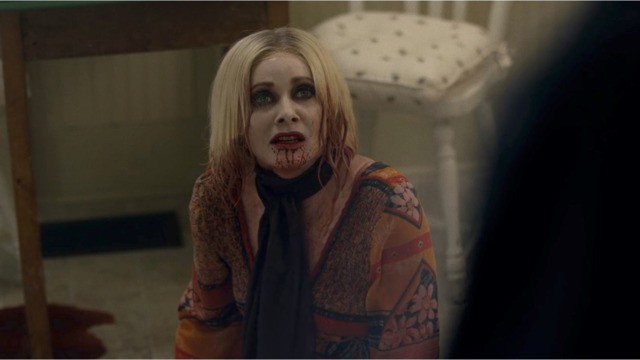 One of the absolute joys of being a film critic and a diehard movie lover is seeing actors that you’ve grown up with over decades deliver awards-worthy performances and shatter any silly notion that genre cinema, horror specifically, isn’t worthy of A-list recognition.

And trust me when I say that there is no actor more deserving than Barbara Crampton, who should be immortalized on the Mount Rushmore of Legendary Horror Heroines with Jamie Lee Curtis and Dee Wallace.

Crampton is proof that talent can’t be contained, no matter the swerves that life throws. After capturing the horror community’s attention in 1985’s Re-Animator — although I still remember her too from Fraternity Vacation — Crampton became a genre icon with a fantastic nine-year run that included Chopping Mall, From Beyond, Puppet Master and Castle Freak. And then she turned her focus to raising a family, while still making an occasional guest appearance on TV or taking a recurring daytime soap opera role.

In 2011, Crampton roared back into horror with a vengeance in You’re Next, and over the past 10 years, she has amassed a string of iconic roles, culminating with Jakob’s Wife, which very well may be remembered as her best, and rightfully so.

Jakob’s Wife is a triumph in every regard.

From Crampton’s turn as Anne Fedder, a meek almost invisible companion to her small-town Mississippi pastor husband Jakob (portrayed by Larry Fessenden in his own career-best performance) to the remarkable 180-degree turn by co-writer-director Travis Stevens — who has advanced lightyears since his 2019 debut Girl on the Third Floor — there is simply nothing about Jakob’s Wife that doesn’t succeed.

This is a vampire movie that not only rewrites the rules of vampirism for the better, but it presents the idea of eternal life not as a curse, but as a gift, to be given after careful consideration, and for the right reasons. That’s especially poignant for someone like Anne, who has tamped down her own ambitions for so long that she’s forgotten what it might be like to finally slip free and recognize her true potential.

Kudos as well to Stevens for not just paying homage to vampire tropes that have permeated horror cinema for more than 40 years — I’m convinced that The Master is a loving nod to Salem’s Lot — but for taking our expectations and goosing them with a righteous blast of female empowerment.

Jakob’s Wife also is a nuanced, intelligent and wholly authentic depiction of a marriage at a midlife crossroads, and what that means for two people who truly love one another but have slowly drifted farther apart than they realized — until one half decides that she wants more, so much more, than she’s ever dared to acknowledge.

It’s a heartfelt and surprisingly insightful exploration of faith and love, what it means to have one or both not just challenged but blown up and reconfigured.
And it’s quite honestly one of the goriest vampire films in recent memory with some truly inventive and sure-to-be iconic kills.

More than anything, Jakob’s Wife is a tour-de-force for its leading couple, and that translates to nothing short of a magnificent gift for their longtime fans.