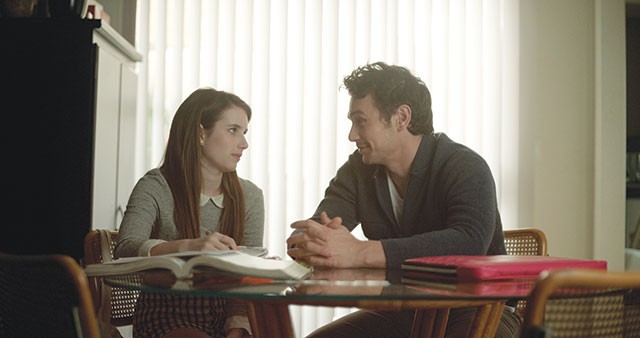 The nepotism level on writer-director Gia Coppola’s feature debut is high. It’s not unreasonable to think the Coppolas rival the Wayanses in familial product placement.

In Palo Alto, Gia Coppola finds a spot for a voiceover from her grandfather, Francis Ford Coppola. There’s also a small role filled by her great-aunt Talia Shire and music by her uncles Jason and Robert Schwartzman.

Then there’s the cast, which features the offspring of other famous people. There’s Teddy (Jack Kilmer, son of Val, who also appears), April (Emma Roberts, daughter of Eric, niece of Julia) and Fred (Nat Wolff, whose parents you may not know, but are Hollywood insiders), teens who are are alternately bored, neglected, overwhelmed and drugged out. Plus, the plot is a familiar latter-day Coppola trope, featuring affluent disaffected people with little or no direction (see also: every Sofia Coppola movie).

It’s distracting, but not as irritating as, say, Roman Coppola’s truly rotten 2013 barf-fest A Glimpse Inside the Mind of Charles Swan III. In fact, Palo Alto is pretty good. It doesn’t say anything new or revelatory, but sometimes good is good enough; the movie establishes a particular time and place. Palo Alto feels like early Bret Easton Ellis with less nihilism. (That isn’t all bad, either.)

Palo Alto is hard to enjoy—also not a bad thing—and if this is what life is like in the tony parts of northern California, it’s no surprise these kids are fucked. (If you’ve spent any time in California, you know this movie feels a lot more LA than it does anything else.) But at least Palo Alto does pretty well illuminating why these kids are a mess.

Mitch (Chris Messina, who’s great in his one scene), Fred’s dad, offers a supposedly on-the-wagon Teddy a chance to smoke up and then hits on him. April’s mother can barely get off the phone long enough to have a conversation with her daughter, and her stepfather, Stewart (the elder Kilmer), is stoned and rewrites her English papers in a way that makes her feel stupid and helpless.

Then there’s Mr. B (James Franco), who takes an interest in April, the well-known school virgin, in a way that’s just wrong. And Fred? It’s best to see his behavior unfold on screen, but the knives and drunk driving are scary enough—and that’s not the worst of it.

The story, which is threadbare, follows Teddy from a second DUI to community service. He likes April, but she’s shy and so is he. In the absence of anything resembling a real conversation, they do things like smoke cigarettes at parties while their friends are passing out, wasted.

That’s pretty much the extent of it, and that’s why it’s hard to enjoy. Again, it’s not bad, but Palo Alto feels like the work of new voices (Coppola’s and, to some extent, Franco’s) that haven’t figured themselves out. Maybe that’s OK for now, but if Gia Coppola keeps making the same movie the way her aunt Sofia does, her work will become monotonous. Chalk this one up to beginner’s luck and insider help. .