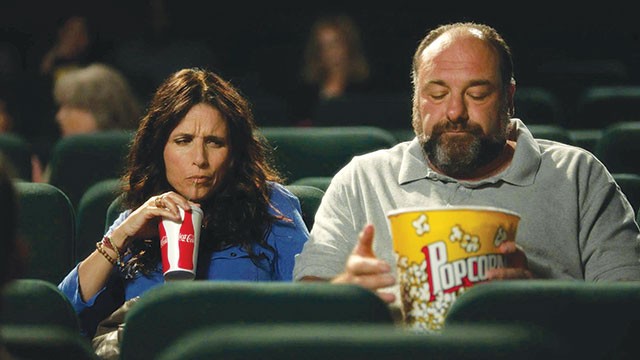 Imagine going on a first date with someone who instantly provided you with a hard-copy list of his or her bad habits and personality deficiencies even before you touched the appetizer. How much time would you save—and how many subsequent dinners could you skip over—if you automatically knew things weren’t going to work out because the seemingly normal person sitting in front of you likes to attend smooth jazz concerts and doesn’t recycle?

In Enough Said, a sharply written and moving romantic dramedy from director/writer Nicole Holofcener (Please Give), the question is dangled in front of Eva (Julia Louis-Dreyfus), a single mom and massage therapist, who unknowingly becomes friends with the ex-wife of her new boyfriend Albert (James Gandolfini, in his first film released posthumously before the crime drama Animal Rescue premieres in 2014). When Eva begins to take full advantage of the situation by asking Marianne (Catherine Keener) about her failed marriage, her curious nature and lack of moral judgment backfires as she uses the information she receives to expect the worst from Albert without giving him much of a sporting chance.

Ironically, the familiar set-up sounds like something Elaine and Jerry would debate in an episode of Seinfeld (wouldn’t you want to know your date was a Nazi from the get-go?), so having Louis-Dreyfus at the center of the narrative feels almost natural even though her iconic Elaine character is nowhere to be seen. What we find instead is an emotionally complicated woman who digs herself too deep into a lie she can’t crawl out of to make amends. With her well-known comedic background, Louis-Dreyfus rarely gets the opportunity to put her dramatic talent on display, so uncovering those little moments in Holofcener’s compassionate script is terrific.

Also showing his range is the late Gandolfini, whose soft-hearted and vulnerable approach to Albert is impressive. His shared scenes with Louis-Dreyfus highlight Holofcener’s craftsmanship as a screenwriter. The dialogue is effortless as we watch Eva and Albert (both divorced and preparing to experience empty-nest syndrome) maneuver through their dates like a veteran quarterback would a pre-season scrimmage. They’re not trying to impress each other, but they still want to perform well enough to stay in the game.

With a perfect combination of understated humor and unpretentious drama, Enough Said is a sweet and oftentimes sad portrait of two middle-aged souls searching for happiness and comfort the way people used to do it before technology took away the human aspect of interface. Plus, knowing we’ll never get to see Gandolfini in another touching role like this makes all the difference when the screen cuts to black.