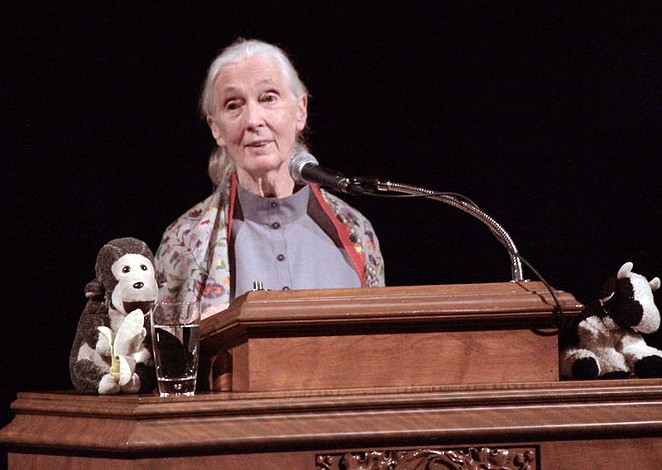 Few voices in the environmental community carry the same weight as Jane Goodall's.

Goodall, the scientist, author and activist best known for studying chimpanzees in Tanzania, spoke at Trinity University last night as part of the school's DeCoursey Lecture series. All of the free tickets to the event were claimed within an hour of them being available.

Goodall spoke with reporters before the lecture. When asked about Lucky, a 55-year-old Asian elephant who’s kept alone at the San Antonio Zoo, Goodall said that to assess such a situation “you really have to know the individual. I don’t. But by and large, I think keeping elephants alone is cruel.”

“I try to put myself in an elephant’s place. ... I feel I would like to be given a chance. If I died on the road, well that’s probably no worse than carrying on being imprisoned by myself,” Goodall said. “They need company, they need other elephants. They’re very social. It’s the same with chimpanzees kept on their own. It’s wrong.”

Activists in San Antonio have lobbied for Lucky’s release, but zoo officials maintain that the elephant receives exceptional care at the zoo, and that the stress from moving her at such an advanced age could kill her.

“At her age and her size, even if she made it to another location, she'd have to go through the process of fitting into a herd since she'd have to prove herself in the pecking order and we don't know if she'd survive that,” Tim Morrow, executive director of the San Antonio Zoo said to the San Antonio Current in an interview earlier this month. “We want to project our human feelings on her and we think, 'I'd be so lonely if I was her.' But we've seen that she's healthier and happier by herself.”

Goodall later lauded zoos for their educational functions, saying the interactivity they provide can be invaluable in a world where fewer and fewer children regularly experience nature.

“A good zoo is actually doing a tremendous amount of good in educating children,” Goodall said. “And they’re also raising money for conservation.”

The lecture was just another brick in the wall for Goodall; she travels over 300 days per year, and she hasn’t spent over three weeks in one place since 1984. But the capacity crowd still soaked up her message — or maybe just the glow of being so close to an environmental icon.

Goodall is both a link to the past and a pinnacle of progressive thinking. Her 90-minute lecture, peppered with references to how things were “back then,” was equal parts hope and scolding — chastising modern society for ravaging the planet and catalyzing climate change, but also laying out reasons for optimism.

“We know too much about what we’re doing, about how we’re polluting the very air we breathe,” Goodall said. “When I think of how we’ve harmed this planet since I was a small child, I feel ashamed of my species.”

Goodall also described the work of her various environmental programs, many of which focus on educating children. But the most gripping parts of her presentation were her anecdotes from studying chimpanzees in the Gombe Stream National Park in Tanzania.

When talking about Spindle, an adult chimpanzee who adopted Mel, an orphaned baby chimp who would have surely died otherwise, Goodall drew the audience back to Tanzania. Her stories about Mike, a cunning chimpanzee who used his intellect to rise to alpha male without a physical altercation, paint a world that’s both familiar and foreign. For better or worse, her stories humanize the animals she lived with.

“It was a fabulous life,” Goodall said. “It was an idyllic world I was in. And why did I leave?”