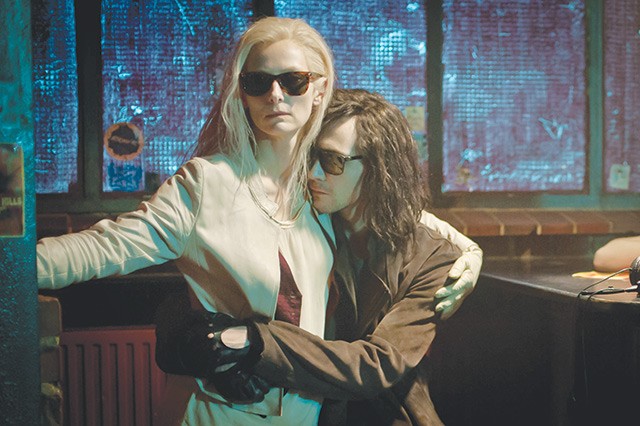 Potential viewers, upon hearing that Only Lovers Left Alive is a vampire movie, can rightly feel blasé. Another vampire movie? In the last decade, there have been seemingly countless entries in an apparently immortal genre: the awful Twilight movies; the Fright Night remake; the excellent Swedish Let the Right One In and its so-so American remake Let Me In; 30 Days of Night; the (hopefully) final Blade movie,Blade: Trinity; and on and on and on. It’s exhausting, and that list ain’t even the half of it.

Now there’s Only Lovers Left Alive, Jim Jarmusch’s take on bloodsuckers. It’s only fitting Jarmusch would get around to vampires eventually; if you’re not given to his particular bent, his work can be exhausting, just like the vampire genre. Perhaps he and the undead were made for each other.

That bent—long takes, almost-eerie silences punctuated by crisp and sometimes opaque dialogue and goofy humor—isn’t for everyone. But when it works, as in Broken Flowers, Stranger Than Paradise and Dead Man, it really works. (I’m even a fan of The Limits of Control—maybe the only fan.)

That’s what Jarmusch taps into with Only Lovers Left Alive: These vampires are tired, lonely, bored, and they’re getting depressed as they watch humanity kill itself. Existing, which means finding blood, staying undiscovered and watching all your friends die, takes a lot of effort. Sometimes it doesn’t seem worth it to go on.

Adam (Tom Hiddleston), a musician who can never take credit for his own work, lives in Detroit in an out-of-the-way house. He has his human friend—or the closest thing he has to a friend—Ian (Anton Yelchin, who stars in the Fright Night remake) bring him vintage guitars and other music equipment.

Sometimes Ian helps Adam get rid of fans who have tracked him down. But the pair’s interactions are always short and stilted.

One day, with the weight of his existence bearing down on him, Adam asks Ian to bring him a wooden bullet. And Ian does.

If you know your vampire lore, wood means one thing. Lucky for Adam, he’s graced with a visit from his wife, Eve (Tilda Swinton, who was born for this role). She spends most of her time in Tangier hanging out with Christopher Marlowe (John Hurt), who has written work under pseudonyms for years.

Together in Detroit, Adam and Eve (the names … ugh) have lots of sex, cuddle in each others’ arms and re-bond over night drives through Detroit’s crumbling façade. Detroit (and to a lesser degree, Tangier) becomes a character in Jarmusch’s narrative, an emblem of what both Adam and Eve see as wanton human destruction of a beautiful planet.

Their tender and much-needed tryst is interrupted the by the arrival of Eve’s sister, Ava (Mia Wasikowska), a free-spirited and immature vampire who only wants to have fun. Adam finds her as distasteful as he finds most humans.

Needless to say, Ava’s arrival and behavior aggravate the delicate existence Adam has taken the trouble to establish. Soon, he and Eve have some hard choices: Stay in Detroit? Go to Tangier? Find something new?

There isn’t much more to Only Lovers Left Alive, narrative-wise. Jarmusch spends a lot of time in Adam’s house, watching him brood, with beautiful cinematography by Yorick Le Saux. This isn’t the Jarmsuchiest of Jarmusch films—that honor would probably go to The Limits of Control—but all the hallmarks are there, including the aforementioned long silences, along with the exacting camera work and equally precise performances.

The cinematography has a meditative quality to it. The shots of the vampires preparing to drink—Adam, Eve and Marlowe—are the showiest, with spinning overhead angles. It’s only appropriate that when Ava drinks, the camera work is designed to look as careless as she is.

In the end, Jarmusch doesn’t add any new twists to vampire mythology, but he uses the basics in new ways. In addition to the wood bullet, there are some nifty means by which Adam carries blood (note: he, Eve and Marlowe don’t prey on the living—it creates too many problems).

Jarmusch, by contrast, gets loneliness, and Hiddleston in particular is adept at showing what that feeling looks like on a once-human face. It’s morose, but also quietly appealing. Maybe that’s why this vampire story is effective when so many others merely suck.