Jenny Slate Won’t Shut Up about Abortion in 'Obvious Child' 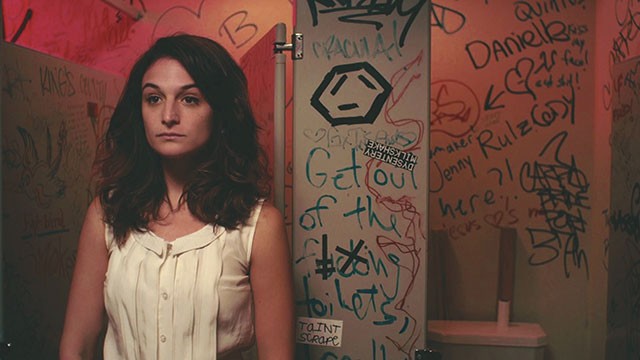 The use of Paul Simon’s tune “The Obvious Child,”—with its chorus of “Why deny the obvious child”—both in the title of this smart indie and shoehorned into the soundtrack, practically begs to be addressed. OK, I’ll bite: What is so obvious? And what are we denying?

Well, it’s obvious that women get abortions—and not just women that are raped, abused, critically sick or desperately poor. Why deny that plenty of Americans find themselves knocked up and decide not to carry the pregnancy to term? Many times their decision doesn’t stem from harsh and tragic circumstances: They just don’t want a baby right now, and they’d like to move on with their lives. They get abortions because, as of now, that procedure is still legal in the U.S. and, in the early stages at least, you don’t have to meet some sort of desperation standard to qualify.

The point of Obvious Child is clearly to demonstrate this scenario in a compassionate, non-threatening way. But the best thing about Obvious Child is that it’s not the only point. And thank god, because a tale about an aimless, young, Jewish Brooklynite who seems too immature to be a mom is not going to convince many pro-lifers to lay off.

For the rest of us, Obvious Child is a deeply funny rom com. Yep, there’s romance involved, surprisingly. And as far as the comedy goes, untested writer-director Gillian Robespierre could hardly have picked a better lead actress than Jenny Slate. Most of America likely knows Slate as Jean-Ralphio’s terrible sister Mona-Lisa on Parks and Rec or perhaps as a recurring character from the Kroll Show. But Slate is also a longtime comedian with a devoted following in New York, and she taps into that as Donna, the struggling stand-up at the heart of the film.

Obvious Child’s first scene, while the hot pink opening credits are still rolling, shows Donna killing it onstage at a grimy comedy club. Her material is pee-your-pants funny and of a feminine gross-out brand Judd Apatow wishes he could concoct. It’s also a good barometer to see how much men in the audience might know about vaginas. If you mistakenly thought The Abortion Comedy of the Summer would be a good date movie, the first five minutes will set you straight.

Off stage, however, Donna’s tenuous 20-something existence is crumbling. Her job at the Unoppressive Non-Imperialist Bookstore is in jeopardy and her smelly loser boyfriend dumps her in between glancing at his beeping smart phone in a public restroom.

Predictably, after bombing her act for a show run by her buddy Joey (Gabe Liedman, Slate’s comedy partner in real life and half of his and Slate’s web series Bestie x Bestie) and still reeling from “getting dumped up with,” Donna hooks up with a very square entrepreneur seemingly miles away from the hipster boys she typically dates. “He’s so Christian, he’s like a Christmas tree,” Joey and Donna joke.

It’s a one-night stand Donna doesn’t think much about until she’s shopping with her roommate Nellie (a wonderful Gaby Hoffmann) three weeks later, complaining about boob soreness when Nellie off-handedly remarks maybe the sore tits are caused by pregnancy.

Confirming her fears at a Planned Parenthood clinic, Donna immediately makes her choice: “I would like an abortion, please.” Then, in one of the film’s many self-aware moments, she observes that it sounds like she’s ordering one in a drive-thru. Though the doctor wants to run through all the options, Donna remains firm in her decision and, in perfect fodder for her comedy bits, learns the soonest she can get the procedure is on Valentine’s Day.

One of Obvious Child’s top strengths is its pacing. Robespierre swiftly moves Donna through the ensuing waiting period, in which her one-night stand resurfaces. Aside from Joey and Nellie, Donna also draws support from her divorced parents, played winningly by Richard Kind and Polly Draper. David Cross makes a fun, but distracting, appearance.

The other key strength in Obvious Child is Slate. In an incredibly natural performance, Slate plays Donna as goofy and outlandish but also, fleetingly, scared and vulnerable. You can easily see how Max, her good-looking Christmas Tree fling, would be attracted to Donna despite her not being a blond “bag of bones” like the one her ex goes after.

If there’s a fault in the film, it’s this: “When they watch Gone with the Wind at the end of the movie, it really drove home how white everything was,” remarked my gal pal as we exited the theater. That’s true; the only people of color we see work in the abortion clinic. It’s a very, very small slice of life, but here’s hoping this made-for-women-by-women comedy gains enough of a following to ripple into Hollywood proper. We could use more films where issues women actually care about—even the taboo ones—take center stage.