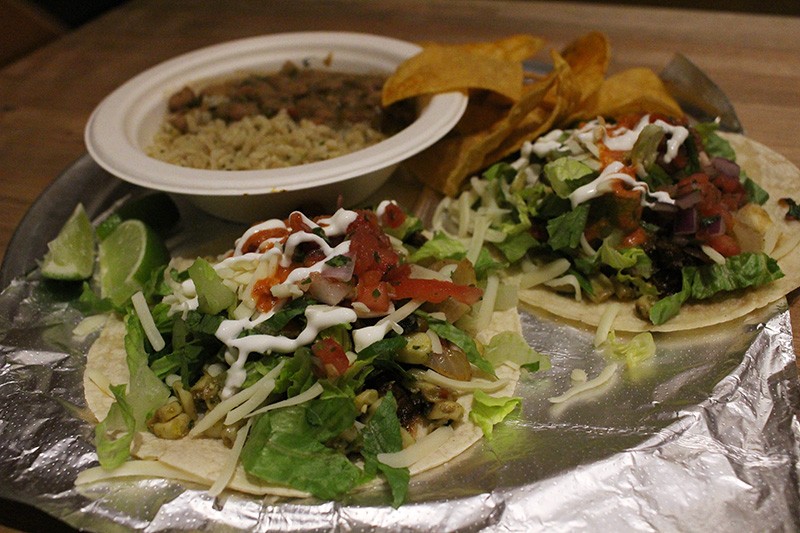 There are lots of things I love about living in New York. Most everything, actually, except maybe snow in March and Meatpacking District bars that charge $20 for well gin + tonic. (I'm throwing shade at you, Griffin.)

There are things I truly miss about San Antonio, though. Many of them are things that one eats and drinks (and then posts to Instagram, to make one's Texpat friends jealous.)

My Yankee compadres know better than to suggest getting barbecue or Mexican food — "my standards are dangerously high," I like to remind everyone who'll listen. But thanks to Arcade Midtown Kitchen's Jesse Perez, Mex just might be back on my menu.

Perez partnered with chain restaurant expert Daihwan Choi to open Óxido, a fast casual Mexican joint in the Flatiron District, at the beginning of March. There's no getting around it: The place has followed in Chipotle's footsteps. But when I'm feeling homesick, Óxido's flavors take me back to the Alamo City.

The set up is familiar: Start by picking a bowl, burrito or two tacos; white or brown comino rice; and chipotle black or charro beans with smoked bacon. Rice and beans come alongside two corn tacos and inside the bowl and burrito. While the rice was nothing to write home about, the charro beans were flavorful and comforting.

Things get more interesting in the proteins. Perez has spiced up the options, offering grilled garlic steak, Ancho pepper chicken poblano, a stewed New Mexican beef and, best of all, carnitas.

The tender shredded pork is seasoned with lime and red chiles — by far the standout protein. And instead of "sofritas" — Chipotle's take on tofu, which, honestly, I find a little disconcerting — the herbivores among us can enjoy tasty red chili mushrooms.

Óxido also offers a decent guacamole and a totally delicious queso blanco, either on top or with chips on the side. Speaking of, here's where Perez lost me: the thick, fresh corn chips get a heavy dusting of cayenne and paprika that overwhelms the flavor of anything else in close proximity. They're not bad, but they steal the spotlight. I appreciate a more unassuming vehicle for guac or salsa.

But in the salsa department, Perez impressed: from a straightforward salsa fresca and pico de gallo (here, called salsa cruda) to smoky jalapeño and HOT (but great!) chile de arbol salsas, you'll want to ask for a side, or four, of salsa.

Óxido may not be yout first stop after landing at LaGuardia, but as a Texan in New York, I'm happy to fill myself up on familiar flavors for about $10. Provecho, y'all.