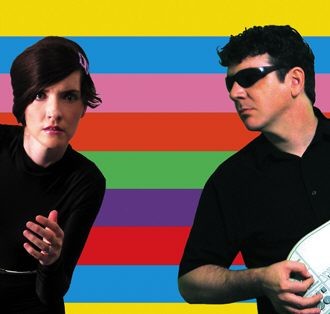 JESSICA: When The Shit City Dream Girls performed at The Mix last year, it was sheer brilliance — the idea of avant-jazz performance/music smack dab in the middle of a noisy college scenester bar. People constantly streamed in and out of the club and the band had the challenge of being positioned right by the entrance, but the boys had our attention as they laid out a psychedelic, jazzy fusion of sax, keys, strings, and guitar sounds that took me to another planet. Bunnyphonic’s haunting accordian tunes and big-head bunny attire was the perfect opening act and would have made David Lynch proud.

JEFF: I won a radio contest in 1990 and the prize was a front-row seat and a backstage pass for Milli Vanilli at the Freeman Colluseum. Meeting video gods Rob and Fab in the spandex-coated flesh was enough to make the night unforgettable, but their performance made it even more so.

The show began in the dark, with  scary-sounding synthesizer music. The lights came up just enough to reveal a stage full of evil ninjas lurking around in the fog. A spot hit stage left at the top of a stairwell to reveal Rob, ready for action. The keyboard player hit one of those “Owner of a Lonely Heart”-HANK! samples, and the crowd let out a scream. A second spot hit stage right, and HANK! —  it’s Fab! Another screeeeaaamm!  Rob and Fab ran down the stairs, leapt into midair for a combination chestbump high-five, landed in fighting position, and started  kicking some serious ninja ass.

After all the evil-doers were devastated, the Vanillis met again center-stage for their patented running-in-place-thing along with the snare drum intro for “Don’t Forget My Number.” As the band kicked in, the crowd went insane. It was irresistable. I put my cool on hold and joined in with the screaming.

The rumor had been out for a while about Milli Vanilli faking thier vocals, but you couldn’t tell. They did an excellent job faking ‘em, and their show was an enjoyable illusion. The whole experience — the bubblegum funk, the hair extensions, the bike shorts, the dancing, the arena full of crazed screaming teenyboppers, the two nuts lipsynching “Blame It On The Rain” — was totally hyperreal.

Jessica and Jeff DeCuir make up the electro-pop duo Hyperbubble.