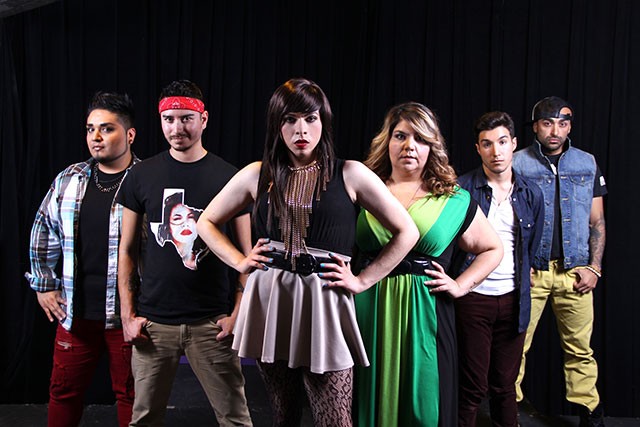 Jesús Alonzo’s play Jotos del Barrio, currently in production at the Esperanza Peace and Justice Center, is a poignant yet playful documentation of the oftentimes untapped experiences of Latino LGBT people who grew up in late 20th-century San Antonio.

Even to those who didn’t share la lucha firsthand, the piece, which had a two-night staged reading at the Esperanza in 1995 and a world premiere at Jump-Start in 2002, is a transcendent theatrical experience worthy of regional attention.

Co-directors María A. Ibarra and Omar A. Leos adorn this long-awaited revival with succulent detail. For instance, before the red bandana-crowned, Selena T-shirt-wearing Manuel Barraza (the show’s boy next door) utters a word, he embodies a recent, yet bygone, era and symbolizes a covert gay sensibility. It’s touches like this where Leos and Dino Foxx (wardrobe) excel.

When Kenneth Miles Ellington López enters the stage dressed in a flowing, unbuttoned white shirt while reciting a poem entitled “Metamorfosis” with choreography, the play takes a multidisciplinary course. López’s movement is fluid and calming, and his movie star good looks don’t disrupt the production. Videos on a pair of large screens play a series of infomercials advertising a self-help DVD titled Straight on Queers, with tongue firmly in cheek.

The scene “Tony’s Mother’s Car,” which features Jaime A. González Quintero, Copeland and López, is a piece of sitcom gold. In the role of the father, Quintero is nothing short of glorious, bantering with his stage partners about Cristina Saralegui, Don Francisco and a closeted gay tío who can make “an amazing cosmopolitan.” An endearing moment comes when the father wants to hug his son but his machismo doesn’t allow it. Although the accent of the cop (Máximo Anguiano) kills, the “por favor” pronunciation bit is so overused it bears mentioning. It seems white people in SA are no longer that oblivious to the inflections of basic Spanish as they may have been in the late ’90s and even early 2000s.

The last scene of Act I gets a little uncomfortable when a teenage son who’s questioning his sexual orientation (Toni Sauceda) confides in his homophobic father (Barraza). As Héctor “Macho” Camacho, an outmoded symbol of machismo, jabs on the muted screens in a 1991 fight, the father beats, then rapes his son. “Like I wasn’t even his own blood,” cries Sauceda in agony.

Considering the saintly reverence the local LGBT community holds for the late Erica Andrews, Sauceda, who plays transgender woman Janie la Transie—a character who’s not a drag performer but, in fact, a manager at Victoria’s Secret—could have been a nervous wreck in the role that Andrews took on in 2002. Gracefully and with her own flair, Sauceda, with her Juliette Lewis-esque rhythm of speech, fills those shoes with her own regality, representing the beauty and even purity in the show.

“Jotería,” Alonzo’s nod to El Teatro Campesino, showcases a masked Copeland and Quintero as old men indulging in a flagrant, Tejano-fueled joke-telling feast. With scrumptious setups, delicious punch lines and an extreme underlying prejudice, this segment qualifies as timeless, vaudevillian sideshow at its best. The versatile Copeland is the show’s comic genius.

The newly added scene “Joto Intuition” features a questioning youth (Barraza) as he spies an older gay man (Quintero) on the bus and instinctively recognizes a glimpse of his future self. Like Titian’s The Three Ages of Man, this scene is the best example of the playwright’s depth and maturity.

There are bilingual plays that “Sesame Street” the dialogue—that is to say, recite the dialogue in Spanish and then in English—leaving patrons proficient in both languages peeved and blowing a huge opportunity to further enhance the narrative instead of just translate it. Interestingly, perhaps in an act of tough love, Alonzo doesn’t seem to give tres cacahuates if you can’t hablar, or even entender. He presents a slice of life where the Tex-Mex experience is biculturally and bilingually interwoven and he writes it precisely how it’s lived and realized—in real-time, without going back to explain things.

With only two plays in his repertoire, the lone disappointment is that Alonzo hasn’t been more prolific. Given the proper marketing, Jotos could find its way into a stronger current via Alonzo’s book of the same name, which will be published by Kómina Press in July. In the meantime, the live onstage version of Jotos del Barrio deserves to be seen.