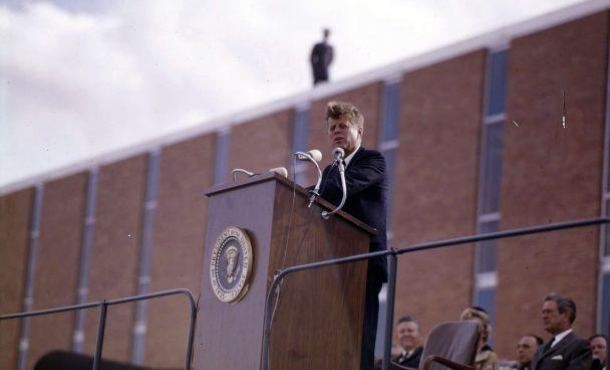 JFK speaking in front of building 150 at Brooks Air Force Base.

The Day Kennedy Died, a must-see documentary on the last 24 hours of President John Fitzgerald Kennedy, premieres tonight at 9 p.m. on the Smithsonian Channel. The film begins with Kennedy's visit to Fort Worth, but very little is shown about his immediate two prior stops: San Antonio and Houston. The following short film, courtesy of the Kennedy Presidential Library, shows President Kennedy in San Antonio on November 21, 1963, 24 hours before his tragic death in Dallas.

And here's the audio of the full speech:

In commemoration of President Kennedy's visit to San Antonio, at 2 p.m. Thursday, November 21 there will be a dedication at the School of Aerospace Medicine, located at Brooks City-Base. Following the dedication there will be a tour of the labs visited by Kennedy after his speech.

And between November 23 and January 3 there will be an exhibit of photos of Kennedy's visit at the Mission Road Branch Library (3134 Roosevelt). Hours are noon to 8 p.m. Tuesday and Thursday, 10 a.m. to 6 p.m. Monday, Wednesday, Friday, Saturday and Sunday.