Jill Stein Should Cede the Battlegrounds, Win the War in States Like Texas 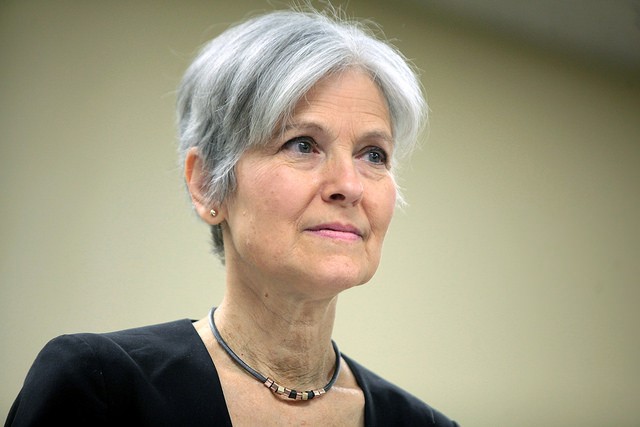 Three weeks before the big day, Green Party presidential candidate Jill Stein ought to voluntarily withdraw her name from the ballot in Florida, Ohio, Pennsylvania, Iowa, and Arizona (she's only a write-in in North Carolina and not registered in Nevada). She should simply say, “I cannot in good conscience help elect a fascist like Donald Trump,” then refocus her party’s efforts on competing in down-ballot races (since almost 300 Green candidates across the nation are running for every office from state senate to school board to city council) and getting 5 percent of the popular vote.

For Greens, breaking that 5 percent barrier would mean millions more dollars in federal funding to amplify their case next time around – which is vital for a party that abstains from Super PACs and corporate donors. She won’t hit 5 percent by getting a fraction of a percent in battleground states anyway, but she conceivably could with solid showings in non-contested states like California, Washington, New York, Oregon, and Texas.

It's also high time to take the gloves off when dealing with the Greens' third party compatriots, the Libertarians. Just because they're an alternative to the two-party system doesn't mean they're a tolerable one. Their out-dated, market-worshiping vision of society is wealth inequality on bath salts. And where does Gary Johnson stand on the looming climate catastrophe? Nowhere. Yet those under 30, who he's performing undeservedly well with, will suffer the direst consequences from this unwillingness to act.

Presented with regressives like Trump and Johnson, why not drown in the Clintonian Kool-Aid? Because she is, in the words of Cornel West, "a neoliberal disaster." Just as British prime ministers Blair, Brown, and Cameron paved the road to Brexit, we are where we are because of centrist Democrats – because post-NAFTA trade agreements shipped tens of millions of jobs overseas, because mass incarceration disproportionately disenfranchised minorities now barred from voting against a racist demagogue, because militarism provokes the very terrorist blowback cited to monger for more war. In short, electing Clintons creates Trumps – or as Stein puts it: "The politics of fear has actually delivered everything we were afraid of."

Although Greens primarily draw from the 45 percent of eligible voters who wouldn't otherwise participate, those trapped in predictably Red or Blue states are fair game, too. There's no such thing as a 'purple state' in the Electoral College. If you reside in Texas, a vote for Clinton is a wasted one – period, end of story, next case, get the check.

Sure, the majors nominated the least trusted candidates in history, but Trump still represents an unprecedented threat to what little democracy we enjoy. 'Clinton and Trump are both bad' is the 'All Lives Matter' of presidential politics – technically true, but willfully ignorant of context. And if, Gore forbid, we spoil yet another election, we may as well stick a fork in the real Left for another lost decade.

On the other hand, a limited Bernie Sanders-esque withdraw would add immeasurably to the credibility of the Green Party going forward. Such a dramatic move demonstrates that we care more about the direction of the country than scoring 'ideological purity'-points. I bet we'd find sympathy even among die-hard Clinton supporters. And let’s face it, we could use the press coverage.

Practically speaking, to achieve 5 percent, Stein needs between 6 and 7 million votes. Last month, Emerson College polls had her at 6 percent in Texas. Boosting that to 10 percent by bowing out of a half-dozen swing states, as well as persuading misguided Libertarians and daydreaming Democrats, is close to a million votes right there. Eight percent in California is another million. Together, that's about one-third of the overall goal in just two states.

So no more naiveté. Jill Stein is not going to be president and, if we're being honest, is probably unprepared to be. But she is set to surpass the 2.8 million votes Ralph Nader received in 2000 and her party deserves credit for keeping lit the progressive embers that, thanks to Sanders, we now know can unexpectedly ignite a wildfire. The true misplaced idealism today is moderate reformism: the myopia that we can tinker around the details (a little Glass-Steagall here, a little Romney/Obama-care there, some fuel-efficient cars) and realistically hope to address the enormity of 21st century challenges.

Once our long national Trumpmare is over, the real struggle begins: On student debt forgiveness, on public financing of elections, on cutting military spending, on rapidly transitioning to renewables, on reparations, on guaranteed income, Jill Stein and Ajamu Baraka are staking out a political frontier that, after a few more electoral cycles, perhaps even middle-of-the-road politicians like Clinton will lay claim to as their own idea all along. Defeating Trump is crucial but relatively easy when compared with the long game of beating back the demented forces of right-wing populism that gave life to Frankentrump in the first place.

Kevin Sanchez is a disc jockey, singer (At War With Dust), and lifelong socialist. This is his first political column for the Current.