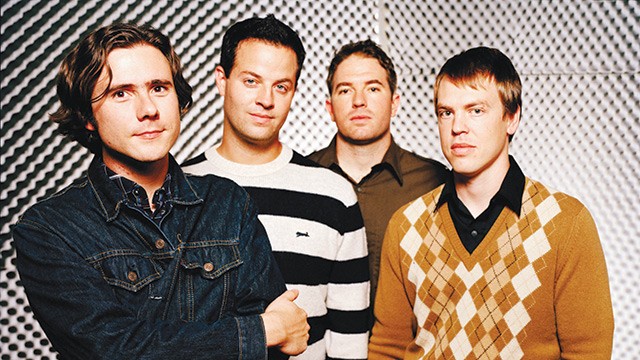 Still, it’s a natural buck for musicians and a natural draw for fans looking to spark those goodtime memories tied forever to the music. While some tunes prompt nostalgic emotions like a bat out of memory hell, other works sound completely timeless, independent of their original context.

Jimmy Eat World, of ‘90s pop-punk fame, straddles this imaginary line in a remarkable (and marketable) fashion. Still cranking out solid pop-punk albums 20 years in, the Arizona four piece has moved away from the Clinton years, the era of their alt-rock content.

Jimmy Eat World’s 2013 album Damage sounds like a probable extension of their early efforts, defined by the infectious, underachiever anthem “The Middle.” While the band looks to soften up their shake appeal with a scattering of acoustic joints, the power chords and unison melodies of yore keep Damage within the realm of pop-punk, overdriven or not.

Though “Sweetness” foretold the popularity of the mid-aught alt-emo of Fall Out Boy and Taking Back Sunday, Jimmy Eat World turned back the moody element for a more nuanced impact on their seventh full-length. Even if the fidelity is a little too pure for its own good, acoustic numbers “Book of Love” and “Damage” show some maturity.

Mature or not, pop-punk refuses to let go of the hearts and wallets of its young devotees. With its saccharine charm and lyrics mainlining to the teenage soul, pop-punk has endured from the the gilded age of Blink-182 and Jimmy Eat World to the newly stoned interpretations of Best Coast and Stagnant Pools, continuing its occupation of adolescents’ earbuds.

What it lacks in band members, Stagnant Pools makes up for in pulsing walls of distortion and effortless, brotherly communication. The project of siblings Bryan and Doug Enas, Stagnant Pools began their career with Temporary Room, released just after guitarist and singer Bryan Enas graduated from Indiana University in 2012. Out on the indie-major label Polyvinyl, Temporary Room wavers between pop-punk and post-punk tendencies, tagging Ian Curtis-esque mumbling and a slur of effects pedals to the nonchalance and laze-laced attitude of pop-punk.

For fans of the same, there’s more of it. The single “Intentions,” from their forthcoming album Geist, is a throbbing, almost untreated listening experience.

“It was as close to a one-take recording process as possible,” Doug Enas told the Current. “We’re trying to give a feel to it like you’re there in the room. It’s a pretty lofty goal, but we were aiming for the style of [Nirvana’s] In Utero.”

As for the name, “We just threw what we had at it until something stuck,” said Enas. If that’s not the essence of punk in pop form—irreverently picking a name to market your music—I’m not sure what is.