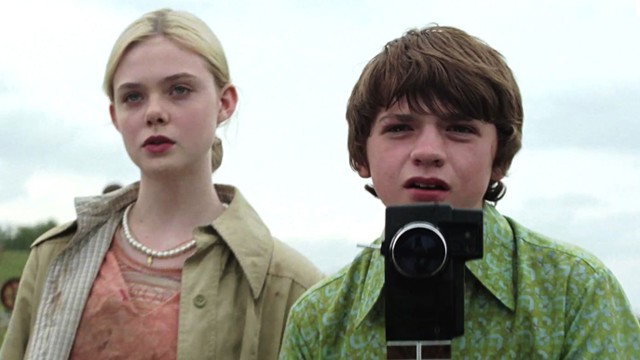 As much as filmmaker J.J. Abrams (Star Trek) would have liked for his nostalgic sci-fi Super 8 to convey as much enchantment as a Steven Spielberg-directed masterpiece like E.T.: The Extra-Terrestrial or Close Encounters of the Third Kind, it doesn’t quite reach that ambitious goal. Nevertheless, Super 8 is not without its own small trove of delightful moments. Standing on its own as a less aggressive version of the Abrams-produced 2008 creature feature Cloverfield, the movie doesn’t have all the elements necessary to make it a true classic, but there are some admirable things it accomplishes, especially when the enthusiastic kids are at the forefront.

Set in the small fictional town of Lillian, Ohio, in 1979, the film follows six friends who are spending their free time during the summer shooting a zombie movie with a Super 8 camera, a set piece not nearly important enough to warrant the title. At the center of the imaginative group of teens is Joe Lamb (Joel Courtney), an innocent boy with a mop-top who is mourning the recent loss of his mother, butting heads with his deputy-sheriff father (Kyle Chandler), and fawning over Alice Dainard (Elle Fanning), a classmate invited onto the no-budget set to give their George A. Romero-inspired project a more affectionate vibe.

The kids’ summer plans take a mysterious turn when they are witness to a catastrophic train wreck that takes place during a late-night shoot. Soon, bizarre incidents start occurring around town (dogs and appliances go missing; the U.S. Air Force shows up tight lipped). Although Abrams keeps the audience in the dark for the majority of the film, we know something has escaped from the train’s cargo and is now terrorizing the town. Super 8’s tagline – “It Arrives” – kind of confirms this isn’t a surprise visit from grandma.

Impressively capturing the ambiance of the era, Abrams embraces his young characters in the same manner as Spielberg with E.T., Richard Donner with The Goonies, and Rob Reiner with Stand by Me. While Super 8’s script is short on the same emotional appeal as those timeless pictures (the father-son dynamic lacks authenticity), Joe and Alice’s puppy love is sweet enough and the lighthearted and humorous dialogue shared between the kid actors complements their realistic performances.

Lest we forget, Abrams knows a thing or two about the action genre. If Super 8’s train derailment doesn’t end up being the single best use of CGI this summer, special-effects hounds have a lot to anticipate.