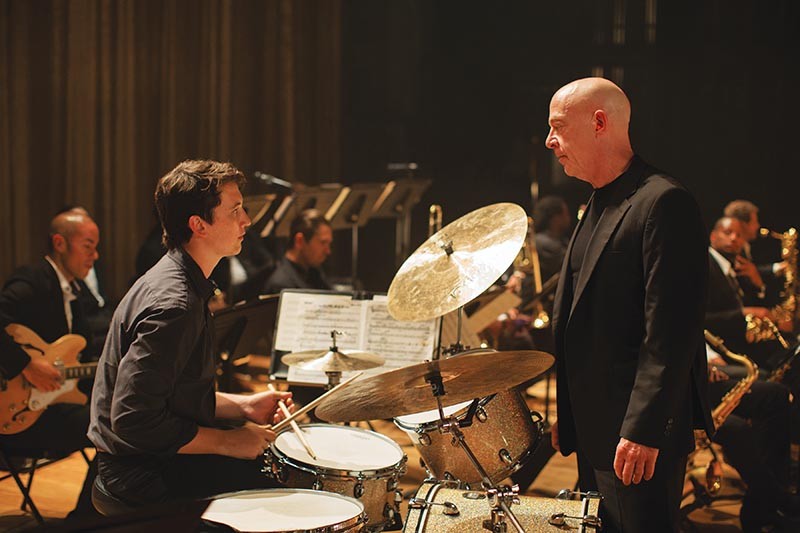 When J.K. Simmons enters a scene in Whiplash, you can hear each percussive clop of his footsteps. In fact, he's the type of dude who would wear loud leather soles just so his students could shush themselves into submission when they know he's in the hallway.

As Terence Fletcher, the studio band conductor at the elite and fictional Schaefer Conservatory in New York, Simmons demands fear and creative discipline from his musicians. Bald, triceps bulging and dressed in perpetual all-black, he instructs in a totalitarian style as effective as it is ruthless.

"There are no two words in the English language more harmful than 'good job,'" says Simmons, explaining his pedagogy. But throughout Whiplash, Simmons and writer/director Damien Chazelle are on a hunt for verbal and physical assaults that are more abusive. In the process of sharpening his new drummer Andrew Neyman (Miles Teller) into a big band weapon, Simmons employs a hail of trash talk, hate speech and bloodletting drum exercises.

Though jazz and conservatory life sketches out the plot, it's the distorted power dynamic between player and coach that Whiplash examines in detail. Through his make-or-break power as the conductor of the premiere Schaefer band, Simmons is a music school god— malevolent and manipulative in the pursuit of making his good players great.

In the first moments between Simmons and Teller, the teacher offers the student a glimpse of compassion to bait the relationship. But when Simmons loses patience, he Bobby Knight-hurls a chair at Teller and slaps the boy's face until the kid knows if he's rushing or dragging the tempo.

Whiplash asks a poignant question for anyone who's been involved in serious athletics or performance—how far is too far for a coach to motivate young minds? As Teller focuses on his quest to be "one of the greats," we see relationships falter and a teenager whittle at himself in monomaniacal grind. After an hour's screen time of abuse, it's no surprise when Teller inevitably attacks his mentor, leading to a downward spiral for both.

"Charlie Parker became Bird because Jo Jones threw a cymbal at this head," Simmons (and then Teller) repeats in Whiplash. It's an often-repeated image in the jazz world—the Michael Jordan Got Cut From JV tale of music—but it's a fable that's also false. Drummer Jo Jones dropped his cymbal to rattle altoist Charlie Parker back into time, according to Stanley Crouch's meticulous Bird biography Kansas City Lightning.

This historical whitewashing, on which all of Simmons' logic stands, is similar to the fabricated image of jazz in Whiplash. The artform is represented by an odd choice, idealizing the verbose (and white) drummer Buddy Rich over more artistic (and black) players like Max Roach or Elvin Jones. It's a pretty pasty flick for a movie taking place in the jazz world. Not one critical role is occupied by a black actor, as Chazelle accidently bleaches a dominantly African-American form.

But as director, Chazelle makes the musical details of Whiplash stand out in vivid detail. When an upright bassist gives a solo demonstration, you can hear the snare rattle in anticipation. In the practice room, players wet reeds, dot ink on fake books and leak spit out their sax valves. Over a pizza date with his brief girlfriend Nicole (Melissa Benoist), Teller calls out the tune played in the parlor, a giveaway of music nerds everywhere.

In scenes of performance, Chazelle realizes the incredible feat of expressing tension through music, using very few language cues. In the final onstage battle between Teller and Simmons, almost 10 minutes pass as Teller mutinies against his former mentor, leading the band through Juan Tizol's "Caravan." The song's duration contains as much passion as any verbal scene in Whiplash, with Simmons and Teller seething at each other, working together and delivering a fraught and stellar concert.

As an actor, Teller's best work is ultimately behind the kit. He looks comfortable in traditional grip, laying down some impressive rhythms while convincingly faking the more technical moments. Teller is certainly the focus of the camera, but it's Simmons that makes Whiplash's good moments great. As a conductor, Simmons' character of Terence Fletcher is arguably more intimidating than his neo-Nazi role in HBO's Oz. But offstage, Simmons is more complex—emotional, good with kids and almost able to justify his teaching style. If Simmons' performance in Whiplash is not Oscar-worthy, then that buzz-phrase has no meaning.