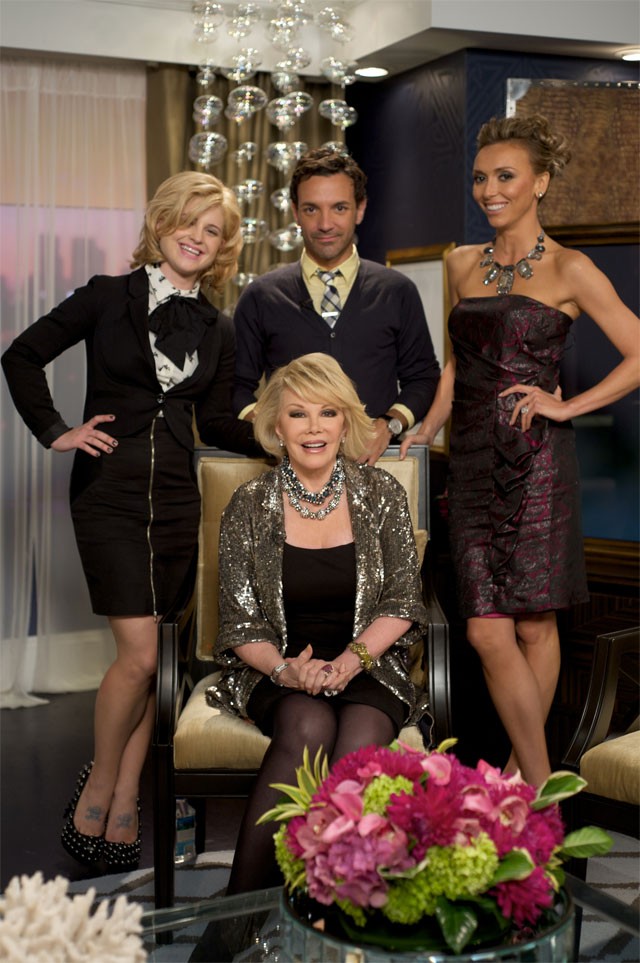 Fashion Police (9pm Fri, E!)
Along with Giuliana Rancic, Kelly Osbourne, and George Kotsiopoulos, Joan Rivers will call out the best and worst of celebrity frocks, naming the “Fash-Hole” who’s committed the most egregious crimes against couture.

The word “Fash-Hole” only begins to suggest Rivers’ raunchy approach to this subject. Now pushing 80, she can still elicit gasps with her foul-mouthed jokes. But her genius — and no, that’s not too strong a word for this pioneering female comedian — is that she can also elicit laughs while making you deeply uncomfortable. It would require a Ph.D. dissertation to explain exactly how she pulls this off, but I think it involves the fact that she’s as hard on herself as she is on her victims. Plus, Rivers is just plain witty — much more so than most of the mean-spirited women comics who’ve followed in her wake.

Goaded by Joan, the panelists help make Fashion Police one of the most transgressive shows on TV. “We’re all going to hell,” Rancic told her colleagues on one broadcast, following a particularly nasty bit. “You know that.”

They probably are going to hell. And I, for one, can’t wait to hear what they think of the clothes down there.

Impractical Jokers (9pm Thu, truTV)
I reluctantly gave this prank show a thumbs up when it premiered last year, despite its lowbrow concept. I wanted to be the mature TV critic and look down my nose at it, but I was laughing too hard.

The idea is that four friends compete to embarrass each other in public situations. For example, one of them is installed as a receptionist at a business, and the others give him instructions (through an earpiece) on acting weird around the people who come through the door.

There’s a fair amount of cruelty involved, but the friends direct it at themselves, not at innocent bystanders. And they have so much fun humiliating each other that it’s hard not to have fun watching them.

Look at me, trying to sound like the mature TV critic with my justifications for Impractical Jokers. The bottom line is: The show is indefensible and irresistible.

Along with the dazzling dance footage, the documentary offers decades’ worth of colorful anecdotes. On a tour of Afghanistan in a freezing auditorium, the audience applauded silently while wearing mittens. In the 1990s, Prince became enamored of the Joffrey and offered the use of his songs royalty-free. That led to both financial solvency and temporary artistic bankruptcy.

“Joffrey Ballet: Mavericks of American Dance” is an enjoyable program that will have you applauding, with or without mittens.

Sugar Dome (7pm Sun, Food Network)
In this reality competition, cake designers and sugar artists team with professional from other fields (animatronics experts, sand sculptors) to create dessert-oriented food art. I like the idea but not the execution, as the producers themselves seem to be on a crazy sugar high. Lights flash incessantly; deafening music drowns out the contestants; sound effects bleep and boom; the host yells; a robotic voice issues commands; and the hyperactive camera creates whiplash effects. Might I suggest that Sugar Dome’s concept — people making pretty-looking sweets —  deserved a simpler treatment?

For me, the program has done what countless diets have failed to do — put me off sugar.

Dick Clark’s New Year’s Rockin’ Eve with Ryan Seacrest (9pm Mon, ABC)
ABC gallantly keeps Dick Clark’s name in the title of its annual New Year’s Eve special, even though Clark died last April. On top of that, the network precedes the show with a two-hour special celebrating the DJ/host/producer. In a business not known for its humanity, I’m touched to see evidence of a heart on broadcast TV. Let’s raise a glass of champagne to ABC, and to Dick.

As for the New Year’s Eve program: to watch or not to watch? Over time, I’ve noticed that this show can set the tone for the year to come. I’ve often tuned in at midnight only to find some awful third-tier act on stage, ruining my night. Then, for some reason (hey, I’m not a scientist), January through March tends to suck as well. Luckily, this year’s broadcast goes first-tier with a performance by the irresistible Taylor Swift.

I’m already getting a good feeling about 2013.

Great Performances (8:30pm Tues, PBS)
“Broadway Musicals: A Jewish Legacy” explores the curious fact that the American musical tradition was created almost exclusively by Jews. Songwriters like Irving Berlin, Richard Rodgers, George Gershwin, and Leonard Bernstein borrowed melodies from Jewish prayers to fashion stories about outsiders overcoming obstacles — a subject they knew a little bit about. In the process, according to commentator Ben Sidran, “They created a way for all of us to explore the ideas that have been part of what we call the American Dream.” It probably says something profound about the United States that a Jew (Berlin) wrote our most popular Easter song (“Easter Parade”) and Christmas song (“White Christmas”).

The documentary is packed with enlightening interviews, rare clips and, of course, the lovely melodies that form the Great American Songbook. We learn about the essential role of Jewish summer camps and discover Hebraic strains even in such secular songs as “God Bless America.”

Bernstein’s daughter comes up with the best theory of why Jews flocked to Broadway: “They were misfits, and they all found themselves in musical theater because it was a place where, with their unusual brains, they could collaborate and coexist in an environment that allowed for that flexibility.”