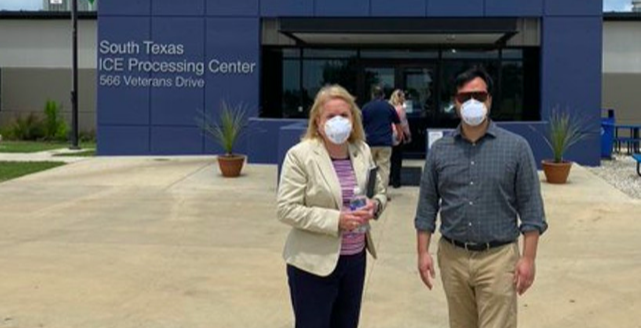 Two dozen members of the Congressional Hispanic Caucus have requested a virtual meeting with the CEOs of CoreCivic and GEO Group, private prison groups that operate immigrant detention centers for the federal government.

Members of the caucus, chaired by Democratic U.S. Rep. Joaquin Castro of San Antonio, warned in a July 10 letter that the crowded facilities pose high risks for COVID-19 outbreaks.

“We have seen the number of coronavirus cases in ICE detention exponentially increase every week, and multiple outbreaks have been reported in detention facilities,” CHC members wrote. “Since both CoreCivic and GEO Group are ICE’s top operators of detention centers, we would like to request a virtual meeting with you and Congressional Hispanic Caucus members at your earliest availability.”

Castro raised similar concerns during recent tours of CoreCivic and GEO detention sites in Dilley and Pearsall, both located south of the Alamo City. He's also called on presumptive Democratic presidential nominee Joe Biden to appoint reformers to federal immigration posts who can roll back hardline policies adopted by the Trump White House.