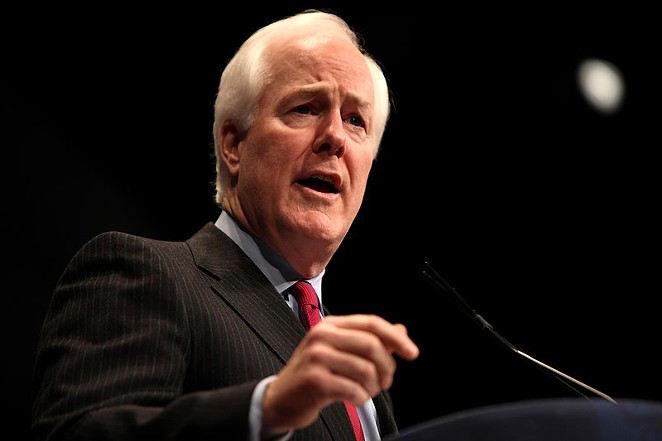 After being called out by Houston's police chief for failing to renew the Violence Against Women Act, Texas Sen. John Cornyn resorted to a tried-and-true defense: "It's the Democrats' fault!"

Houston Police Chief Art Acevedo during a Monday news conference tore into Cornyn, along with fellow Republican U.S. Sen. Ted Cruz and Senate Majority Leader Mitch McConnell, over their failure to act on gun control legislation. The prior week, he tweeted to the same three lawmakers, demanding that they take action to protect women from domestic violence by renewing the Violence Against Women Act, which expired in February.

"Unfortunately, important legislation like this has fallen casualty to impeachment mania," Cornyn wrote. "We will keep trying to pass a bipartisan bill but it takes two (parties) to tango."
Never mind that the Senate is unlikely to conduct its trial of the president until after the holidays and that the Democrat-controlled House passed a version of the Violence Against Women Act in April. The law can't be reinstated until after the Senate passes a version, but the measure has faced opposition from the NRA, which opposes its additional restrictions on gun access.

Unfortunately, important legislation like this has fallen casualty to impeachment mania. We will keep trying to pass a bipartisan bill but it takes two (parties) to tango https://t.co/Qr3NcTOzM3

After Cornyn's response, Acevedo didn't let things drop, instead pointing out in a follow-up tweet that the Senate had found plenty of time recently to deal with other issues.

"Senator, there are 24 hours in a day. The House is managing to get legislation out, and passed VAWA and other critical legislation," he tweeted. "You, @tedcruz & @senatemajldr are passing legislation & confirming judges. Make women and families a priority, like you do the aforementioned."

Acevdeo made headlines earlier this week when he delivered a tongue lashing to Cornyn, Cruz and McConnell at a press conference before he prepared to escort the body of a Houston officer killed responding to a domestic violence call.

The chief told reporters he didn't want to see lawmakers' "smug faces" as they talked about how much they care about police officers "when I'm burying a sergeant because they don't want to piss off the NRA."

"[W]ho killed our sergeant?" Acevedo asked rhetorically. "A boyfriend abusing his girlfriend. You're either here for women and children and our daughters and our sisters and our aunts, or you're here for the NRA."