John Hagee Wants To Make Sure He's Getting Your Money 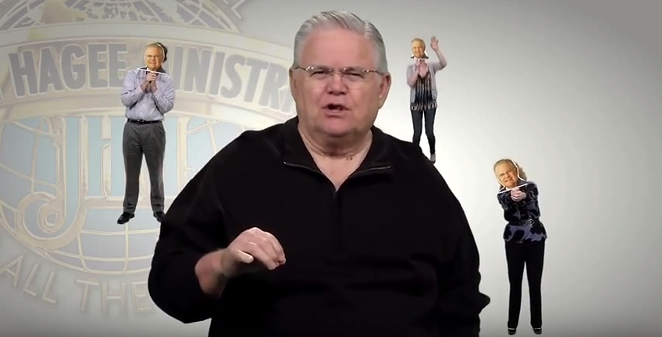 Apocalypse-mongering, mega-church pastor and YouTube star John Hagee wants to make sure you're lining his coffers and supporting his lavish lifestyle instead of throwing your money away.

When we last heard from the evangelical Cornerstone Church pastor, he was blaming Barack Obama's policies on Israel for all the ebola. Now the ultra-right wing Zionist has taken to his Messenger of All YouTube channel — we're going to assume "all" doesn't include anyone in the LGBT community — to warn against fraudsters posing as him on social media outlets.

Hagee claims impostors are setting up pages on Facebook and other social media outlets and sending out friend and follow requests, and then soliciting donations in order to bilk Hagee Ministries followers out of their money.

"These people copy our pictures, our information and try to convince you that they are either me or this ministry," he says in the video against a backdrop of actors carrying Hagee face masks. (Where can we get one of those?)

The pastor asks that his followers report these pages by emailing socialmedia@jhm.org, adding that links to official Hagee Ministries social media profiles can be found on its official website.

You can watch the video below.

It's responsible of Hagee to warn his congregation of the inherent dangers of online tithing. But it's probably best you don't donate to his religious organization at all, unless you firmly believe in his intolerant, anti-gay, anti-Palestine, religious conservative views. Or unless you believe he could use a few more bucks on top of the millions of dollars he's already earned spreading those views in church, on TV and online.

Perhaps you can give your religious donations to organizations that actually practice what they preach.

But, whatever, it's your money.