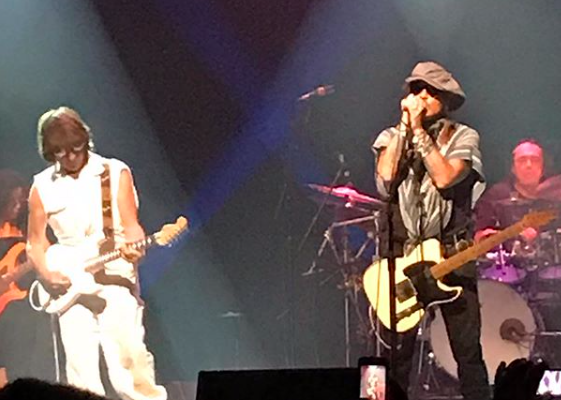 Fans of Jeff Beck got an unexpected jolt of star power this weekend when actor Johnny Depp showed up at the Tobin Center Sunday night to jam with the guitar god.

As he has done at several other recent stops on the tour, Depp joined the former Yardbird for a handful of songs, including "Isolation," social media posts show.

Instagram users posted both onstage and backstage snaps of the A-list movie star plus video from the performance.

"That time Johnny Depp showed up at the Tobin to jam with Jeff Beck!" the Tobin said in a post showing Depp singing while Beck looks on, playing his trademark white Stratocaster. "Good times!"

"At first I thought it was Adam Ant and I am like wow! That's Johnny Depp," chimed in user @instahenjen72. (Seems like an easy mistake to make given the pirate-inspired garb Depp wore onstage.)

That time Johnny Depp showed up at The Tobin to Jam with Jeff Beck! Good times!

Depp also joined the two-time Rock and Roll Hall of Fame inductee onstage last week at Eric Clapton's Crossroads Festival in Dallas and at other stops along his current tour.

The pair have also been recent collaborators offstage. They performed music inspired by Link Wray's "Rumble" for a short film advertising the Dior fragrance Sauvage. Dior pulled the ad earlier this month after complaints that its use of a Native American dancer amounted to cultural appropriation.