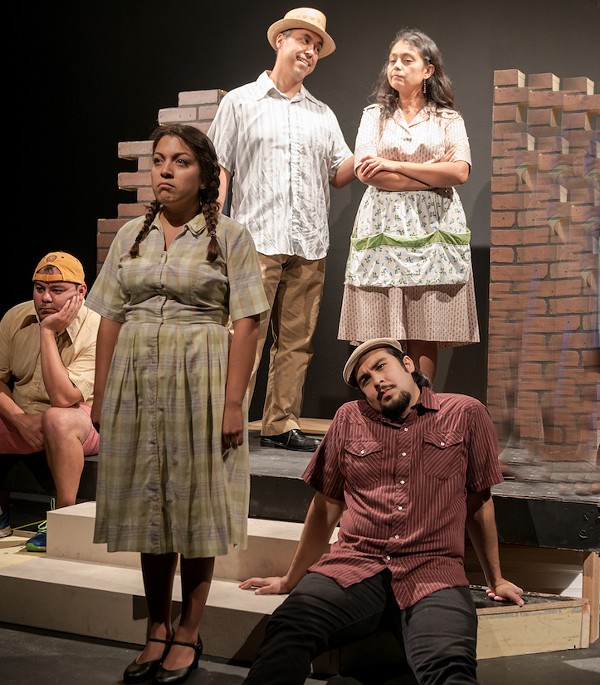 For José Rubén De León, securing Sandra Cisneros’ blessings to direct The House on Mango Street was easy. Making it a reality was a different matter.

“It almost didn’t happen,” De León told the Current during a rehearsal break in early August. “A play like Mango Street gets produced, but not a lot. You have to pay for the adaptation and you have to pay Sandra. This was a little hurdle that came about, and at one point the theater said, ‘Hey, we can’t afford this.’” De León even sent Cisneros a note, telling her that the project would be postponed until further notice, but Cisneros reassured him: “Don’t worry about it. I’m sure it’s going to be okay.” The play, based on Amy Ludwig’s stage adaptation (as acclaimed as the book itself, and not to be confused with Tanya Saracho’s 2009 musical version), opens this Friday at The Classic Theatre of San Antonio and runs through September 25.

“I don’t know how it happened,” said De León. “When I asked the theater how they were able to pull it off, they said, ‘We just did it!’” The Classic Theatre’s executive director, Kelly Roush, told the Current no sets of royalties were waived or reduced and both Cisneros’ and Ludwig’s camps came to an agreement with the theater.

“Yes, we were concerned at one point, but it’s such an important story and an exciting time to do it here with José, that we decided to take the chance and pay more than we usually do,” she said over the phone.

The book itself isn’t a conventional novel but a coming-of-age collection of vignettes that present an unusual challenge to the eight-actor cast, each of which plays an average of eight to 10 characters who come on and off stage almost constantly, using Esperanza Cordero (Gypsy Pantoja playing the older version of the teenager that is the book’s backbone) as the narrator who holds everything together.

“She’s like the camera moving the audience around to see the vignettes,” said De León, who’s also known for his work directing Federico García Lorca’s The House of Bernarda Alba and performing one-man shows like the Agustín Lara tribute Simplemente Lara (set for its 99th performance September 18 in Seguin) and Unforgettable: A Celebration of the Life and Songs of Nat King Cole (performed in July at the University of the Incarnate Word). De León auditioned 26 actors for eight characters and, precisely, the only role that was pre-cast was that of the older Esperanza.

“[Pantoja as the older Esperanza] anchors the whole thing,” said De León. “I know her very well, and I knew she was the right person for the part.” The key role of “Little Esperanza,” the young teenager growing up in Chicago, was cast with a bang but soon gave the play an unexpected, bitter turn.

The role was originally given to 11-year-old Valentina Inés Ibarra, who has been acting “since I was inside my mom’s womb, literally” (she’s the daughter of playwright/actor/director Marisela Barrera).

“I asked Marisela if her daughter would want to audition, and the little girl came and blew me away,” De León told the Current in early August. “No one auditioned better than her.” However, last week — eight days before opening — she was replaced by Eraina Porras (last seen in Enfrascada at the Guadalupe in April), who was already part of the cast playing a variety of roles. A “pissed” Barrera took to Facebook to announce her boycott of the play, to defend her daughter and to condemn the way The Classic Theatre handled the situation.

“My daughter was abruptly let go … because her lines were not down,” wrote Barrera. “And she had chingos of lines, most of the lines in the play.” Barrera said that, on Wednesday night, she was asked into executive director Roush’s office and was given the news. Her request to give her daughter 48 hours to memorize the lines, she said, was denied. Barrera wrote that the meeting with Roush should’ve taken place two weeks earlier, “in order to give my daughter a running chance to turn it around” and that De León “should’ve kept her in the ensemble, maybe with a smaller role; there are dozens of roles in the play ... Essentially, the theater has lost the very message of the play: hope, the central theme of The House on Mango Street."

“A child is involved and I respect [Barrera] and Valentina’s feelings,” De León told the Current in a text message on Thursday night. He and the theater had no further comments … until late Thursday night, when De León sent an update via text: “We have a 12-year-old who has stepped [up],” wrote De León, adding that the girl is Bella Villarreal, daughter of local politician Mike Villarreal. “The child actress blew us away. She is a natural.”

The rest of the cast includes Gabriel Sánchez, Joshua Segovia, María Ibarra and Arianna Angeles (who, among other characters, play the parts of Lucy and Rachel, the Texan neighbors in the book, respectively) and Salvador Valadez (who played the character of Chale in the Guadalupe’s Spring production of Chato’s Bridge).

In 1995, Cisneros’ body of work earned her a $500,000 MacArthur “Genius Grant,” which the John D. and Catherine T. MacArthur Foundation gives annually to individuals who show “extraordinary originality and dedication in their creative pursuits and a marked capacity for self-direction.”

“Sandra Cisneros has made a difference to Latino literature,” wrote Cuban-American Pulitzer-winning author Oscar Hijuelos. “Beginning with House on Mango Street, her works have conveyed the Southwestern Latino experience with verve, charm, and passion.”

In the book, Esperanza’s struggle (yearning to leave Mango Street yet always coming back to it) is presented in a way anyone can identify with.

“With its tenderness, its humor, and its wide-eyed truth-telling, Esperanza’s story becomes our story, whether we’re Latinas or not,” wrote Cuban-American author Cristina García. But it isn’t an easy book to stage, and if the challenges presented by the book and play aren’t enough, the 99-seat Classic Theatre’s in-the-round design (with the audience seated on both sides of the stage) doesn’t make things any easier.

“I’ll give them permission to create, it’s going to be an organic kind of creation,” said De León. “I don’t think many of them have worked in the round. When I was in Laredo, I was directing in the round so I have experience in that; I told them how I was going to navigate them through that process, but also to give them the opportunity to play. They’re going to have to switch almost immediately: They leave and come back on stage with a different character, they’re always moving forward with the stories. They’re all very excited because there aren’t many plays that give them that kind of opportunity.”

For De León, directing a play by Cisneros is special. Not only did Cisneros suggest De León perform the Agustín Lara show (“Just listen to the music; I’m sure he’s going to grab you and then he’s not going to let you go,” she told him — and that’s exactly what happened), she encouraged and supported his work throughout the years. Directing Mango Street is his humble way to give back to a person who deserved a better treatment from San Antonio.

“I used to go to a lot of these gatherings at her home [in San Antonio], and I feel people took advantage of her,” De León said. “She gave and gave and gave, and people just took and took and took. They just sucked her energy, you know? People felt entitled, because they were her friends or they hung around with her, that she needed to support them, buy all their art or promote them. I saw it.”

Amy Ludwig’s adaptation of The House on Mango Street hasn’t been performed in San Antonio since Jump-Start Performance Co. staged it 21 years ago, and De León has also secured permission to eventually direct Elena Poniatowska’s Spanish-language version of the play, which the Mexican author gave to Cisneros as a present on the book’s 25th anniversary in 2009.

“Spanish and/or bilingual theater in San Antonio is on my to-do list,” said De León. “But first things first, and I’m excited with my cast for Mango Street. I wanted to make sure I had people who could do the work, otherwise I would not have tackled it. You can’t spend rehearsal periods training actors, so I wanted people who are ready to play and create, and that’s what I got.”