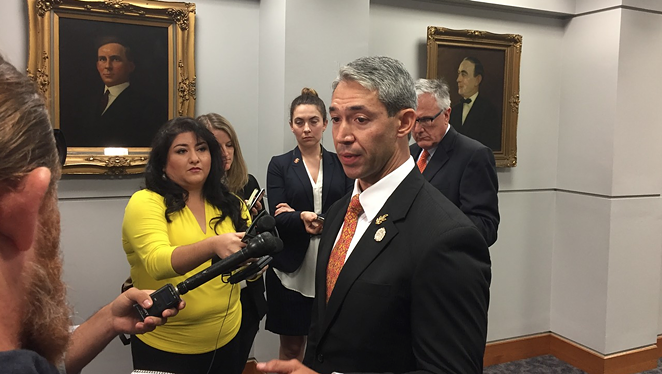 A federal judge has denied a request by the city of San Antonio aimed at extending the quarantine for coronavirus evacuees at Joint Base San Antonio-Lackland.

On Monday, the city declared a state of public health emergency and asked for a temporary restraining order after a person who later tested positive for the virus was cleared for release by the Centers for Disease Control and Prevention and visited locations including North Star Mall.

In its court filing, the city maintained that releasing the 120 remaining evacuees given CDC approval to leave the site Monday posed a threat to public safety.

U.S. District Judge Xavier Rodriguez denied the TRO, however, saying he couldn't override the CDC's determination that a 14-day quarantine and two negative tests for the disease are “sufficient to prevent transmission or spread of COVID-19.”

Even so, Rodriguez said he said he shares city officials' concern that more testing may be necessary to ensure public safety.

Even without the restraining order, the declaration of emergency declared by Mayor Ron Nirenberg states that the city can unilaterally require evacuees to extend their stay at Lackland.

As of Monday night, the evacuees remained on base, according to media reports. Some were already packing their bags to leave as the city requested the restraining order, according to the Express-News.

“Especially given the release this weekend of a patient who had to be brought back into isolation after a 'weakly positive' test for the virus, it is imperative that every one of the individuals at Lackland be tested and cleared before being released, as recommended by our medical community,” Nirenberg said in a written statement. “If the federal government will not do the right thing in this case, the City of San Antonio will use its powers so that appropriate measures are taken to protect the community from exposure to COVID-19.”