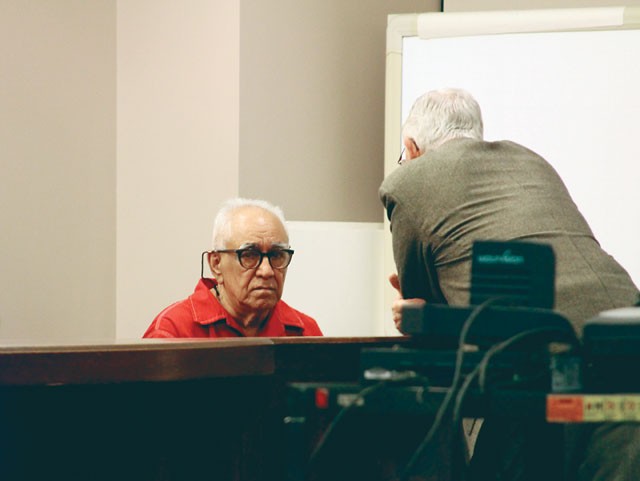 Frank Navarijo was still recovering from a surgery that removed his cancerous prostate when he was accused of raping his daughter in 1998. At trial, Navarijo, a 23-year SAPD veteran and former Department of Justice contractor, embarrassingly admitted he was incontinent, sometimes forced to wear adult diapers, and impotent during the period he was accused of assaulting his daughter.

Some 13-years after Navarijo was handed his 20-year prison sentence, a judge has ruled there's "clear and convincing evidence" a jury today would never have convicted him. Along with his daughter's recantation in a court hearing last month, experts who have reviewed the medical evidence against Navarijo say the forensics used to convict him were fundamentally flawed and didn't prove his guilt.

The girl's maternal grandmother, Paula Garza, first came forward with allegations against Navarijo, claiming the 5 year old made an outcry during a visit one night. The girl's account, however, bounced back and forth. The day after the supposed outcry, she told her mother the abuse never happened. She later divulged to a Child Protective Services caseworker, "Grandma told a lie … grandma told me to say that," records show.

When the girl took the stand, she gave a troubling account of how her father raped her, sometimes with a "pico," or, as she put it at trial, "a little sharp knife."

Last November the daughter testified that her grandmother hated Navarijo, and forced her to fabricate the story. She told a judge she had been too afraid to disobey her grandmother, saying she often beat her with a belt for punishment.

Forensic psychologist Joann Murphey conducted lengthy interviews with the girl, now a 20-year-old college student, and called her story credible. Murphey also reviewed videotaped interviews child protective workers conducted with the girl after the allegations surfaced. In court last year, Murphey said she was "outraged" by how unprofessionally the interviews were handled, saying caseworkers asked "inappropriate" and "misleading" questions of the girl, perhaps reinforcing the false narrative of abuse.

On Feb. 11, District Judge Maria Teresa Herr signed an order asking that Navarijo be freed and his conviction overturned. In her recommendation to the state Court of Criminal Appeals, Herr writes that there's "clear and convincing evidence that no rational jury would convict" Navarijo today.

"Really, the only issue before the judge, and ultimately the Court of Criminal Appeals, is the credibility of that girl," said Rico Valdez, head of the Bexar County DA's appellate division.

The Current first looked into Navarijo's case while researching the case of the San Antonio Four, four local women accused of sexually assaulting two young girls in the mid-1990s. As the women continue to profess their innocence, the Innocence Project of Texas has taken on their case.

As with Navarijo's case, a child victim last year came forward and recanted the story, claiming she was forced to testify to an assault that never happened. And Dr. Nancy Kellogg, head of pediatrics at University of Texas Health Science Center and largely considered the state's foremost authority on child sexual abuse, examined the victims and provided court testimony in both cases that helped secure convictions.

Kellogg has declined to comment on the cases publicly.

A reading of the transcript shows Navarijo's conviction largely hinged on Kellogg's testimony in court, and there's indication her findings carried enormous weight with jurors as they struggled with the decision. As juror Monica Moreno recalled last year, the physical evidence is what swayed the jury. "That just showed us the real damage that had been done to that poor little girl," she said.

The CCA will likely decide whether to overturn Navarijo's conviction sometime in the next 3 to 6 months, Valdez with the Bexar County DA's office said. "Quite honestly, given the record, I can't imagine they wouldn't."