Just Because: Here's a Porcupine Eating a Pumpkin 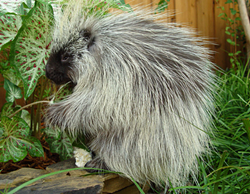 Prepare for an overdose of adorable. For no reason whatsoever other than this is on the internet and it must be seen, here's a video of the cutest porcupine ever nibbling on a baby pumpkin.

Meet Teddy Bear, a delightful North American porcupine who is a bit of a YouTube sensation. You'll understand why once you watch the video. He belongs to Zooniversity, a wildlife education company based right here in Texas. They travel around promoting zoological conservation to schools, scout groups, churches and the like using the universal power of cute animals, but Teddy Bear is clearly the star.

Remember Sebastian the hedgehog from The Hobbit: The Unexpected Journey? Teddy Bear provided, for lack of a better term, the voice for the creature in the film.

But here he is munching away on a tiny pumpkin with the cutest enthusiasm and fervor. The video was posted to YouTube last year, but it's been making the rounds again because, come on, he's a porcupine eating a pumpkin. He's a porcupumpkin, if you will, or perhaps, a pumpkinpine. (No, we are not ashamed to venture into pun territory.) If you're over the onslaught of pumpkin everything this month, it'll just take this one video to change your stance.