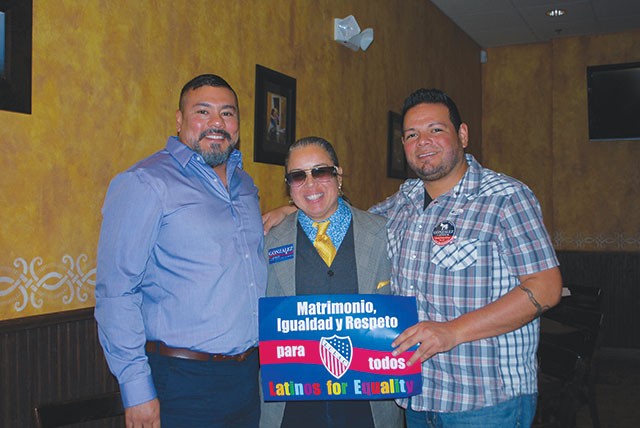 Although Latinos and Latinas have come a long way in the history of this country (and this city), we’re not a monolithic culture. In fact, we’re as diverse as any other culture, and face challenges internally as well as externally. As with any group, there’s a unique set of circumstances that LGBT Latinos face.

Whether you’re talking about Latino machismo, the essential (and sometimes maddening?) role of the family, immigration issues, or educational attainment, the ante is often upped when it comes to civil rights and even simple acceptance. But it’s not about special treatment—it’s simply about the added complexity of multiple identities.

Esmeralda Zuniga tells me, “As lesbian and Latina, it can be a double whammy. Sometimes you have to work double- or triple-hard to be considered half as good, at least in the eyes of some people. And even then, you’re not always equal.” Zuniga was recently elected secretary of San Antonio’s newest League of United Latin American Citizens (LULAC) Council—one that is distinctly formed to engage and support LGBT Latinos in San Antonio. The group just organized formally last month and is in the process of being chartered.

Zuniga moved to San Antonio from the Valley about a year ago with her partner, Sylvia Garza, and their daughters. After searching for a local organization to be involved with, she’s excited at the prospect of how the group can help others to see LGBT rights as a natural progression in the advancement of civil rights.

LULAC has over 900 councils nationwide (with more than 100 councils in San Antonio alone). Founded in 1929, LULAC calls itself the oldest and most widely respected Hispanic civil rights organization in the United States. Councils often “hold voter registration drives, citizenship awareness sessions, sponsor health fairs and tutorial programs and raise scholarship money,” according to the organization website. LULAC is non-partisan.

The immediate past president, Rosa Rosales, and current president, Margaret Moran, are both from San Antonio. Rosales marched as grand marshal of the San Antonio Pride Parade and Block Party in 2010.

Sam Aguilera, the prospective president of SA’s LGBT LULAC council, is also the man responsible for bringing the local group together. “We’re in the process of chartering our council to become a 501(c)4 nonprofit, a civil league operating exclusively for the promotion of the common good and general welfare of the Latino community, including LGBT Latinas and their families.”

“As president,” Aguilera continues, “I would like the council to work on promoting acceptance of LGBT family members. This includes working with Spanish-speaking families and community members seeking to build a greater understanding of the LGBT community.”

An LGBT council is not new for LULAC. In 2006, the national office approved the charter for the Dallas Rainbow Council #4871. Aguilera invited officers and members of the Dallas group to visit here in December 2013 to network, share their experiences and build the case for a local chapter.

San Antonio will be the third Texas city to have an LGBT council, after Dallas and Houston. One of the biggest myths that Aguilera, a social worker by profession, wishes to dispel is the oft-cited “fact” that Latinos are inherently homophobic. “This is simply not true,” he says.

In a research study conducted by Bendixen and Amandi International, 83 percent of Latinos were found to support laws that protect LGBT people from discrimination in housing and employment. Further, 75 percent of Latinos showed support for school policies that prevent harassment and bullying of kids who are gay or lesbian or who may be perceived to be gay. The study can be found at Familia es Familia, a national public education campaign aimed at LGBT allies in Latino communities.

Although LULAC had for years been silent on matters concerning sexual orientation and gender identity, that trend began to change in 2006 when LULAC National condemned a federal marriage amendment that would have limited marriage to a man and a woman. That same year, the Dallas Rainbow council was formed. Since then, LULAC has supported causes such as the repeal of “Don’t Ask, Don’t Tell” and an inclusive federal Employment Non-Discrimination Act.

Aguilera concludes, “Because every member of our council is a part of someone’s family, we’ll approach our work with the both Latino and LGBT communities with that consciousness.” Zuniga agrees. “For my partner and me,” she explains, “this is a way to walk the walk for our daughters. It’s a way to show them how to treat others the way they’d want to be treated and how to be active in our city and beyond.”

While the group is still forming, interested people should contact Sam Aguilera directly at (210) 918-0593 or at alamocitylgbtadvocate@gmail.com.