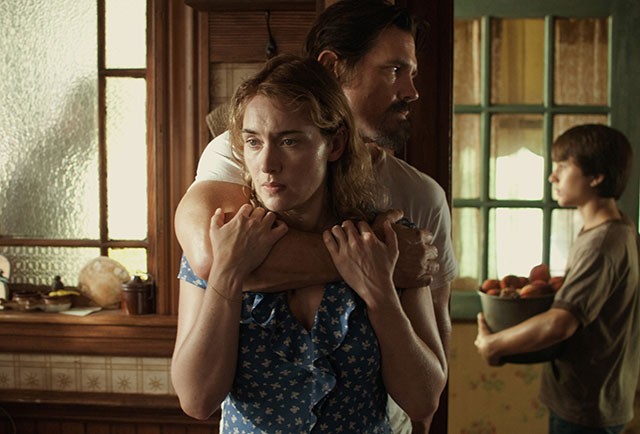 A fantastic actress who’s still at the top of her game, Kate Winslet has the ability to turn a bad movie into a good one. But even she can’t even redeem Jason Reitman’s new film Labor Day.

OK, so Winslet was nominated for a Golden Globe for her role here as a single mom struggling to raise her 13-year-old son in a small rural town where she falls for an escaped convict. But the film oscillates between drama and thriller and never successfully works as either.

Early in the film, we quickly realize that the emotionally unstable Adele (Winslet) has trouble taking care of life’s simplest tasks. She sends her son Henry (Gattlin Griffith) to make deposits at the bank. She struggles to put her car in reverse and back out of the driveway. She panics if he leaves her at the grocery store to look at comic books. Her hands shake. She’s obviously dealing with some kind of trauma. (We later learn exactly what happened to make her such a nervous wreck.) Casting Winslet in this role was a good decision. She plays the part perfectly and shows just enough cleavage to be sexy despite her insecurities.

One day, while she and Henry are shopping, a burly goateed man named Frank (Josh Brolin) approaches Henry and insists on the small family giving him a ride. He seems sinister. Turns out, he is—the dude has just escaped from prison. He was having his appendix removed and, rather than stick around for it to properly heal, he hopped through the window and ran. The stitches are still bleeding and he hobbles a bit as he walks. Adele and Henry don’t realize who he is right away but, after hearing local news reports and seeing the roadblocks, they quickly figure out that Frank is the guy the local cops are after.

The fugitive makes them take him back to their home where he plans to hide out for the long Labor Day weekend and then depart when the trains start running again and he can furtively hop a ride. Though Frank ties up Adele (he maintains he doesn’t want her getting in trouble for being an accomplice), he doesn’t seem like such a bad guy. He’s an excellent cook and can make a pretty damn good pie. He teaches Henry how to throw and catch a baseball and then helps him work on his swing. He fixes stuff around the house and changes the oil in the car. Suddenly, harboring a convicted killer doesn’t seem so bad. During a weirdly intense pie-baking scene, things heat up between him and Adele, putting poor Henry in an awkward position.

Keeping Frank a secret proves to be problematic, especially when nosey neighbors keep stopping by without any advance warning. One neighbor even has Adele watch her autistic kid for a day. Frank treats the kid with unrivaled kindness (and almost gets caught as a result). He also has a close call when the local cop (James Van Der Beek) follows Henry home one day and asks a number of probing questions that suggest he might be onto them.

So Frank and Adele make plans to get the hell out of Dodge. Though they plan to take Henry with them, they don’t realize that the young man has fallen for the brash Mandy (Maika Monroe) who’s just moved to town. When Henry hints that he might be harboring Frank, she finds it exciting and likens his mother and Frank to Bonnie and Clyde.

But Frank and Adele are no Bonnie and Clyde. In fact, the chemistry between Brolin and Winslet is so tepid, it’s hard to even tell they’re in love. While Reitman’s previous film, 2009’s Up in the Air, a film about a traveling company executive who fires people, spoke to issues of corporate greed and really hit a nerve, Labor Day doesn’t carry the same gravitas. It’s hard to believe the same director could have made both movies.

Perhaps the source material is to blame: The film is based on Joyce Maynard’s novel. But Reitman adapted Maynard’s book and wrote the screenplay, so he’s the real culprit here. The film doesn’t fully explore subplots about Henry’s coming-of-age or Frank’s past, the latter of which is depicted through a series of flashbacks. A brief appearance by Tobey Maguire, who plays an older Henry, sums up an ultimately unsatisfactory ending.