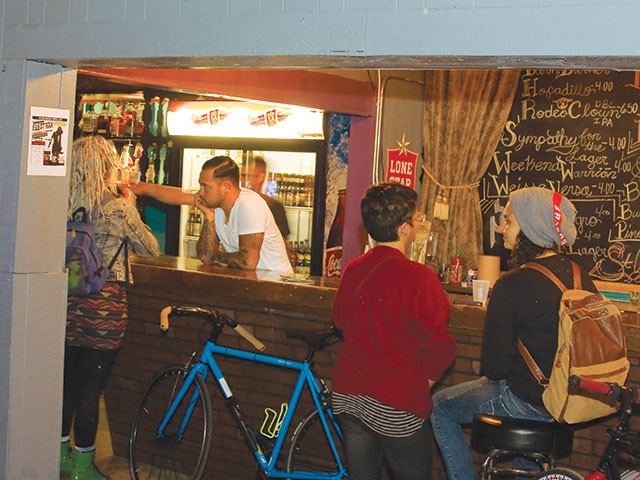 On March 2, approaching dawn, unknown assailants with a penchant for automotive violence slammed their beater into the front door of the Bottom Bracket Social Club (the same fate that struck Tucker’s Kozy Korner twice in January). The suspects took a television, $300, a few bottles of booze and smashed the jukebox out of malice, or maybe just for the quarters.

The Bottom Bracket, located on Colorado near Culebra, responded on their Facebook page with a stoic “Shit ain’t gonna stop us.” That pretty much puts a bow on the attitude of the BBSC. Rather than mourn the loss of the TV and a few hundred bills, the proprietors seemed pretty OK with their new doublewide entrance.

Look up dive bar in the dictionary, or look just off Fredericksburg in the Five Points neighborhood, and you’ll find the Bottom Bracket Social Club. An unassuming cinderblock building on a block consisting mostly of warehouses, the BBSC is a church for barflys, a social club that would make Bukowski proud.

Serving $2 tall boys and strong-ass wells at $3, Bottom Bracket knows how to keep its customers happy, or at least buzzed. A variety of top shelf liquors are available, though be warned: Don’t order anything snooty. When I asked the bartender under the dim, bare bulb lights if he could recommend a whiskey drink, he replied, “You mean like a Jack and Coke?” It’s a dive through and through, the idea of the “mixologist” is tossed aside like a necktie or the napkin under a drink.

Still, BBSC’s selection of spirits (many of them top-shelf) and bottled beers leaves little to be desired. Stocking 25 beers in bottle or can, Bottom Bracket knows how to satiate their audience. PBR and Lone Star cover the budget option, while a healthy variety of mid-range brews–Lagunitas, Shiner, St. Arnold’s, etc.–up the ante in the $4-$5 range.

On weekends, the Bottom Bracket Social Club also hosts the semi-pro South Side Sandwiches out of the bar. I ordered a beef taco on fresh corn, savory and happily lacking the weighted aftereffect of cheap beef. South Side’s veggie tacos were also on-point, rich and flavorful, much more than a basic fajita mix—no pollo. For $3 a pop, South Side’s offerings make the Bottom Bracket Social Club a destination for a cheap dinner and drinks, or just some tacos to soak up a night of heavy boozing.

For bands, the BBSC offers a new venue alternative to the St. Mary’s Strip, though the aesthetic doesn’t veer far from that of The Mix or Hi-Tones. From the soapbox of its Facebook page, the BBSC claims its DIY status, that “We support all art and music of all people, we like all that shit and always will. Wanna play a show here call 267-9160 ask for Tito, and you will most likely get a ‘hell yeah bring your ass on by.’” Bands play inside the Bottom Bracket’s main room, or outside on the expansive side patio. But like their selection of mixed drinks, don’t expect to be stunned by the house system.

With “Keep SA Real” and “Taco Bland” shirts on the wall behind the bar, the BBSC has made its stance quite clear on the recent transformations of midtown SA. From their entertaining and unfiltered Facebook pulpit, grammatical warts and all, I quote, “FUCK THOSE PUSSIES, POSING AT THE PEARL!!!!! Bet you wont see another bar not give a fuck to say whats on their mind. If your gonna open a place do you, don’t use someones name, to help your greedy asses sell duck tacos and $12 Cocktails. That shits not punk rock homie… #RAMSsiprit lives on here, not in yupville.” Sic, obviously.

Though it’s a vocal indicator for their realness, check BBSC’s Facebook for more grounded blasts too, like the menu of ever-evolving drink specials. A great spot to nurse a beer, watch the Spurs and park your road bike right by the bar itself, the Bottom Bracket Social Club is a welcome addition to the SA dive scene.