Keeping Tabs: Overlook The Pronunciation And Grab A Texas Viognier 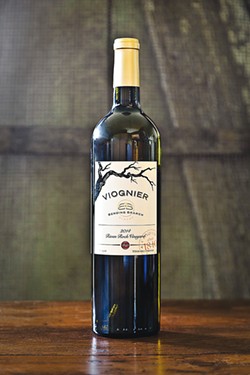 First things first: it's pronounced vee-oh-nyay, y'all. Second, this very Frenchie-sounding grape is poised to become the major white wine grape of Texas.

Move over chardonnay, you're so last century.

Here's some proof: in 2013, at least 14 Texas wineries bottled viognier. There have been scholarly symposia on the subject. Lone Star viognier has beat out contenders from France and California in more than one blind tasting and one vintner, Pedernales Cellars, has won double-gold at a prestigious French wine competition.

It was time to rustle up a few bottles.

But a word of caution: 2013 was a tough year in the Texas High Plains appellation from which much of the state's viognier comes.

According to Richard Becker of Becker Vineyards, freezes wiped out much of the crop, forcing him and others to bottle juice from Cali just in order to keep a product in the market. Tip: make sure Texas appears somewhere on the label.

One producer intent on making lemonade (metaphorically) out of 2013 was Kim McPherson of McPherson Cellars in Lubbock. The "Brothers Blend" ($10) was made possible by calling upon his wine-making brother in California for supplemental grapes.

The resulting wine is brilliant gold in color, honeyed and lightly floral on the nose and dominated by bright grapefruit (with a little raisin-y muscat) on the palate. We look forward to trying his totally Texas 2014.

Viognier is one of the first grapes to ripen in Texas. When picked early, citrus flavors tend to dominate; when harvested later (at higher sugar levels), the fruits turn to peach and melon.

Becker Vineyards' 2014 Texas High Plains Viognier Reserve ($ 15) has a little of both: lime peel and some clove to start and as the wine warms, dried apricot, melon and a whisper of vanilla. This wine feels especially lush in the mouth just above refrigerator temperature, too.

One of the blind-tasting giveaways of viogner from its ancestral home in France's Upper Rhône Valley is its honeysuckle aroma.

I didn't pick that up from any of the Texas wines I sniffed. The 2014 Pedernales Cellars Texas Viognier ($16) was honeyed to be sure but flat-out peachy in both aromas and tastes to start — after which a pleasant, lemony acidity took over.

The award-winning 2014 Texas Viognier Reserve was a totally different critter. It opened with more smoke than honey — plus a hint of minerality. Lemon curd and green melon then dominated the palate. This was easily the most complex wine tasted — but also the most expensive, at $40.

A different kind of exclusivity is conveyed by the 2014 Riven Rock Vineyard Viognier from Bending Branch Winery near Comfort. The wine is a very limited edition and as the grapes come from a vineyard "just over the hill" from the winery. The wine ($34) itself is smoky-spicy with loads of grilled lemon and a bracing acidity.

Viognier is still seeking its regional expression as a combination of French style and Texas swagger. When it finds it, bar the cellar door.