Keith Morris' mission: get rid of bands that suck 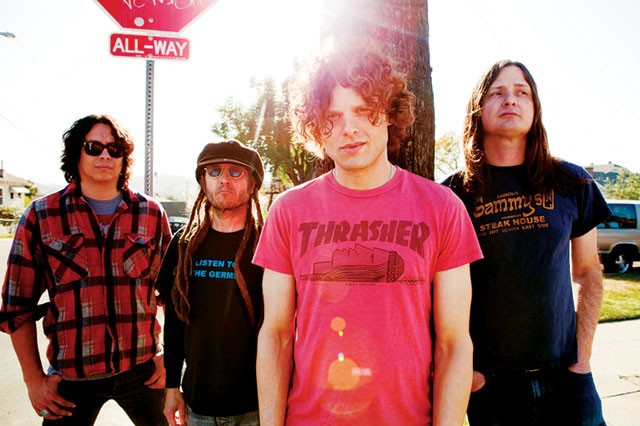 Nearly 34 years after the release of Black Flag's definitive hardcore EP Nervous Breakdown, frontman Keith Morris is still churning out raw, incendiary music. Following his tenure with Black Flag and Circle Jerks, Morris teamed up with Dimitri Coats (Burning Brides), Steven Shane McDonald (Redd Kross), and Mario Rubalcaba (Rocket from the Crypt) to form OFF!, a band built to shatter the lameness associated with the dreaded word "supergroup." I talked to Morris over the phone about OFF!, wipeouts, and why he refuses to label his new band as hardcore or punk.

How have you kept up such an insane work ethic for 30-odd years?
I came down with diabetes, so I've got a new lease on life. I gotta go for it, you know? So I'm trying to be as healthy as possible, trying to keep active, just be doing something. And there's a rash of bands that are out there. There's some really great ones, but the majority pretty much suck and need to be bulldozed off a cliff. They need to be scolded, slapped, told the way it is. I use that as fuel, part of my energy. It makes me angry, along with a lot of the political things that are going on, and watching people scamper along like cockroaches.

The new album, OFF!, is 16 songs in 16 minutes. Going into the studio, was that the intention?
We're older guys now. Everybody's got a bunch of stuff to do, so when we find an opening, we got to dive into it and go. We don't have a lot of time to dick around. Like when I was growing up as a kid around all the surfers and the skaters, you just go. We've been doing this for quite a while. We know what we're doing, we know how to get it, we just have to go out and achieve it.

The first song off the new record is "Wiped Out." What's your worst?

When I was in Black Flag, we played a basement on Inglewood Ave [in Los Angeles] and they had a keg in the middle of the floor in a tub filled with ice. It was so hot and humid that the ice melted and the water ran up to the front of the non-existent stage. The band launched into the first song and I reached for the mic and the Big Bright Light went off. When I picked myself up, they were about 3/4 of the way through the first song. It was pretty badass.

Describe OFF! as succinctly as any of the songs in the album.
Four fun-loving, mischievous, know-it-all, rockin' dudes. Do not refer to us as punk or hardcore — we are a rock band. And we're angry. Because we're angry and we know we don't have a lot of time to hang out, we got to get in and get out, trim the fat, and have a great time.