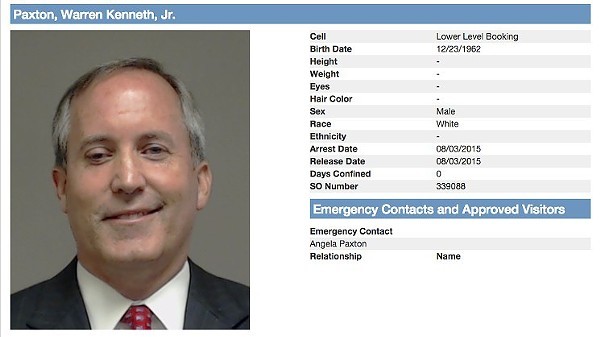 The Texas Court of Criminal Appeals has rejected Attorney General Ken Paxton's final attempt to appeal the felony charges against him, cementing his appearance in court early next year. He faces up to 99 years in prison if convicted.

A grand jury indicted Paxton last year on three felony charges — two first-degree felonies for convincing friends and fellow lawmakers to invest in a tech company he was secretly being compensated by, and a third-degree charge for not registering as an official investment adviser representative for the company. Instead of addressing the charges, Paxton jumped to blame prosecutors and a District Judge for creating a "politically driven" case against him.

Paxton was still a state senator when the charges were initially filed, and he admitted to the State Securities Board that he did in fact shirk the legal requirement to register as an investment adviser. Despite the fact that he'd already admitted to state securities violations, voters gave Paxton the AG seat in 2014.

The appeal before the CCA was Paxton's last shot at tossing the indictments against him after being rejected in two lower-level courts earlier this year. The court's decision comes just days after the U.S. Securities and Exchange Commission threw out a lawsuit against Paxton over nearly identical allegations.

Paxton's attorneys said they will ask the court to reconsider their decision, using the federal case as reasoning.

"We anticipate filing a motion for rehearing because we have tremendous confidence in our case. The charges against Ken Paxton are without merit," Paxton attorney Philip Hilder said in a Wednesday statement. "A federal court, following a lower legal standard, ruled that the fraud charges were baseless."