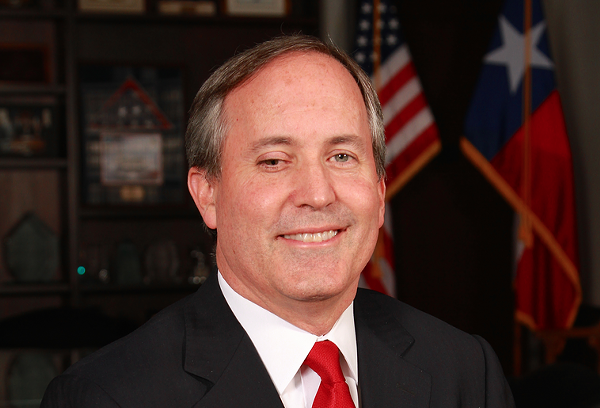 Texas Attorney General Ken Paxton issued an opinion on Sunday that concludes government officials may claim religious objections to deny marriage licenses to same-sex couples. Mums the word on whether or not those same religious objections can be used to turn away couples seeking a divorce.

Bexar County and officials across Texas began issuing marriage licenses to same-sex couples within hours of the ruling.

In an interview with the San Antonio Current ahead of Friday's ruling, Bexar County Clerk Gerard "Gerry" Rickhof voiced his support for marriage equality.

"There is pent-up demand that has been building for decades, he said. "I'm very tired of violating these peoples' civil rights," he said. "I'm personally very tired. We're going to embrace it."

In a statement released today, Paxton acknowledges that a Supreme Court ruling is considered the law of the land, but he'll ignore it anyway as the state's top law enforcement official. Why? Because those activist judge assholes are basically making shit up at this point and will bring downfall to very foundation of American democracy. (We paraphrase.)

Friday, the United States Supreme Court again ignored the text and spirit of the Constitution to manufacture a right that simply does not exist. In so doing, the Court weakened itself and weakened the rule of law, but did nothing to weaken our resolve to protect religious liberty and return to democratic self-government in the face of judicial activists attempting to tell us how to live.

Indeed, for those who respect the rule of law, this lawless ruling presents a fundamental dilemma: A ruling by the U.S. Supreme Court is considered the law of the land, but a judge-made edict that is not based in the law or the Constitution diminishes faith in our system of government and the rule of law.


Supreme Court justices can't tell people how to live, especially government officials who want to ignore a sworn duty to uphold the Constitution so they can tell same-sex couples how to live, according to Paxton. And they can do so while on the government payroll thanks to the Constitution, a copy of which we presume the attorney general keeps in his pocket with the parts he doesn't like redacted.

Pursuant to the Court’s flawed ruling, the U.S. District Court for the Western District of Texas issued an injunction against the enforcement of Texas marriage laws that define marriage as one man and one woman and therefore those laws currently are enjoined from being enforced by county clerks and justices of the peace. There is not, however, a court order in place in Texas to issue any particular license whatsoever – only the flawed direction by the U.S. Supreme Court on Constitutionality and applicable state laws.

Importantly, the reach of the Court’s opinion stops at the door of the First Amendment and our laws protecting religious liberty. Even the flawed majority opinion in Obergefell v. Hodges acknowledged there are religious liberty protections of which individuals may be able to avail themselves. Our religious liberties find protection in state and federal constitutions and statutes. While they are indisputably our first freedom, we should not let them be our last.


Paxton's opinion gives county clerks a state-backed reason to discriminate against gays and lesbians who wish to exercise their marriage rights. But he acknowledged that county clerks and other officials may have to defend themselves in court and pay the fines associated with not doing their job. Fortunately, there are armies of pro bono attorneys and conservative-funded legal resources that are dedicated to make sure that state-sanctioned same-sex discrimination can continue in order to stave the impending annihilation that will doom American democracy.

It is important to note that any clerk who wishes to defend their religious objections and who chooses not to issue licenses may well face litigation and/or a fine. But, numerous lawyers stand ready to assist clerks defending their religious beliefs, in many cases on a pro-bono basis, and I will do everything I can from this office to be a public voice for those standing in defense of their rights.

Texas must speak with one voice against this lawlessness, and act on multiple levels to further protect religious liberties for all Texans, but most immediately do anything we can to help our County Clerks and public officials who now are forced with defending their religious beliefs against the Court’s ruling.

You can Paxton's full same-sex marriage ruling below.