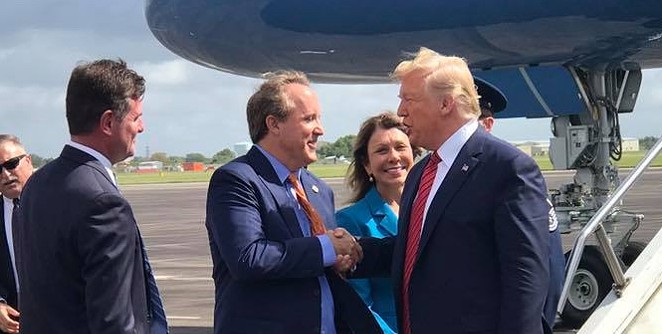 Talk about fighting a war on many fronts.

Embattled Texas Attorney General Ken Paxton — already in the midst of a securities fraud case, a whistleblower lawsuit and a reported FBI probe — is now refusing to turn over messages related to his appearance at the pro-Trump rally that preceded the January 6 Capitol insurrection.

A group of news organizations has requested copies of messages the Republican AG sent or received while in Washington for the appearance, according to a jointly published story. Those communications would normally be available under the Texas Public Information Act, which guarantees public access to government records, including those on officials' personal devices.

The Texas Tribune and ProPublica, the Austin American-Statesman, the Dallas Morning News, the Houston Chronicle and the San Antonio Express-News are working jointly to obtain those records, according to their joint report. They're also investigating Paxton's open-records practices.

"The news outlets discovered that Paxton's office, which is supposed to enforce the state's open records laws, has no policy governing the release of work-related messages stored on Paxton's personal devices," the story states. "It is unclear whether the office reviews Paxton’s email accounts and phones to look for requested records, or whether the attorney general himself determines what to turn over without any outside checks."

The fight comes as Paxton faces down a long-delayed trial over felony state securities fraud charges and a lawsuit from top aides inside his own office who maintain he retaliated against them after they reported that he abused his office to aid a campaign donor. The AP has also reported that the FBI is investigating similar allegations.

Paxton, a steadfast Trump ally and lightning rod for corruption allegations, filed an unsuccessful and widely ridiculed lawsuit to overturn the 2020 election. After speaking at Trump's January 6 rally, he falsely claimed that the violent insurrection that left five people dead was the work of antifa instead of Trump supporters.