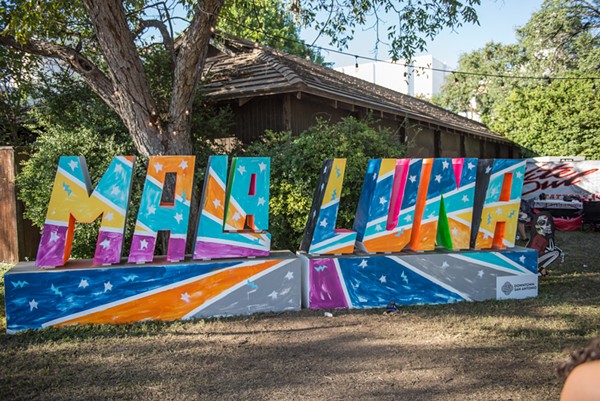 The festival could easily be seen as a sort of trial run for the future of the brewery grounds, which are on a fast track to getting a development makeover. Just this Tuesday, the city’s Zoning Commission approved a sweeping $300 million plan to bring a bowling alley, retail store, movie theatre and housing units—for starters—to the 60-acre Lone Star property.


The complex will also host outdoor events and festivals similar to Mala Luna, if only smaller-scale. For a city clamoring to revitalize its center with diverse events and attractions, Mala Luna appeared to be a giant leap in the right direction, and a ceremonial kick-off for the pending Lone Star reboot.


Except not everyone saw it that way. Lone Star is located in Southtown, one of many areas near downtown that's seen rapid redevelopment in recent years, which is home to a handful of overlapping neighborhoods—and perspectives. Ones that seem a bit more hesitant to embrace the changing landscape.


“Obviously, a lot of people were upset with the noise, both its volume and duration,” said Chris Price, president of the King William Neighborhood Association.


The architecturally-pleasing—and historically upper-class— King William neighborhood butts up against the northwest side of the Lone Star property, meaning residents could easily hear Mala Luna’s thumping EDM into the night. Many complained of the noise, the parking, and other nuisances.


For Francine Romero, it was the people the event attracted.


“I heard the noise, yes. But I also noticed that there were so many people hanging out in groups in different areas around King William. People that aren’t normally in the neighborhood,” Romero said. “I mean, there’s always King William foot traffic on the weekend, but this was different. It just felt different.”


Romero did say she’s impressed with the evolution of her neighborhood—and wants to make sure it stays less a “place to party,” and more a place to call home. There’s a subtle stubbornness when it comes to change in King William Neighborhood, according to Price.


“Most people support change, but there is a minority here that really doesn’t want anything to change about the neighborhood,” he said. “What people here want is to know these events can be managed responsibly. It reflects back on the character of the neighborhood.”


Gina Martinez, Mala Luna’s festival director, had expected this kind of response. She received two emails complaining about the festival—a low number for a large, loud, and brand-new event.


“There are always going to be people that have a hard time adjusting to the change. Which is understandable,” she wrote in an email to the Current. “[That’s] why we felt we needed to go above and beyond to let them know what was going on.”


Before the festival, representatives from ScoreMore, the concert promotions company behind Mala Luna, met with city council members and other officials to make sure they were following the rules. All the boxes had to be checked—there was a lot riding on this festival's success. Mala Luna was dipping a toe into the somewhat untested waters of San Antonio's EDM and hip-hop scene.

ScoreMore staff also attended neighborhood meetings to give nearby residents a heads up. For some reason, however, ScoreMore did not visit King William’s meeting.


The company behind Lone Star’s redevelopment push, CBL & Associates, said that while the future site will host many music and various outdoor festivals, they intend to comply with all city noise ordinances, just like Mala Luna did.


“We want to be great neighbors...and will have our own noise ordinances in place to respect those living at Lone Star and the surrounding community,” wrote Jennifer Greer, senior director of development at CBL, in an email to the Current.


Presidents of two other nearby neighborhoods, Lavaca and Lone Star, said they received no major complaints about Mala Luna—and were cautiously happy about its success.


Some neighbors in Lone Star neighborhood even profited off of it, selling concert-goers parking spots in front of their houses during the show. Susan Powers, president of Lone Star Neighborhood Association said the only thing she noticed was some Mala Luna promotional fliers left on nearby sidewalks and streets.


“But it’s nothing compared to Fiesta,” Powers said.


Lavaca’s neighborhood president, Selsa Gonzalez, said that while the festival was noisy and ramped-up neighborhood traffic, it wasn’t necessarily a bad thing. And with La Villita’s Dia de los Muertos festival and Comic Con drawing additional people downtown, it was impossible to point fingers at one event.


“There was a lot going on, but that’s why we love downtown," she said. "That's why we chose to live here."