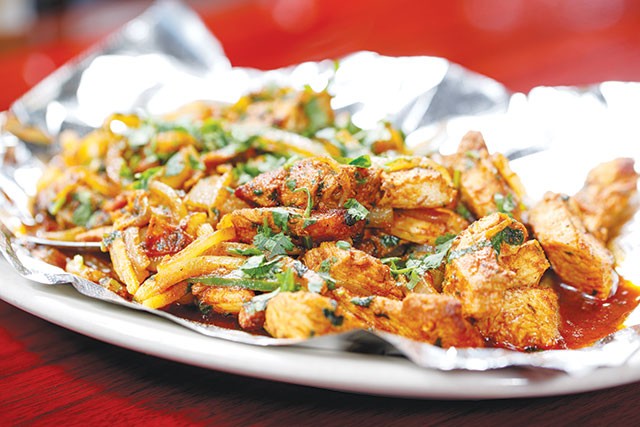 Spoiler alert: Most of my reviews follow a similar pattern. There’s a brief bit of history, I give a rundown of the decor, the menu and then I indulge you in whatever bites I may have sampled throughout both my visits. I often find a particularly good dish that I feel compelled to recommend to other diners and more often than not, I struggle to find something that I’d definitely go back for. This isn’t the case at Kohinoor Tawa & Grill. Most, if not all of what I tried was a sure-fire hit. I don’t want to bog you down with details that don’t involve all the meats we ate, so let’s dive right on in.

Kohinoor, or K2, is known originally for its first location off Starcrest, which is temporarily closed while K2 gets going. The tight menu is comprised of Pakistani faves, including but not limited to a small appetizer section, grilled dishes, tawa (or griddle) dishes, chicken gravy entrees, vegetarian entrees, rice dishes, breads, wraps and desserts. Lassi fans can still get their thrills with velvety smooth iterations, but we’ll get to that in a minute.

Guests are encouraged to place orders at the counter (which doubled as a bar during the joint’s days as La Terraza Mexican Restaurant), where either one of the owners or their family members will take your order and kindly walk you through the menu items. Enticed by the dry erase board’s offering of nihari, described as beef gravy by the staff, I committed to the order and added on the house paratha, Kohinoor’s signature flat bread. What arrived at our table was a thinly rolled out, fried and incredibly pliable unleavened offering served on a large pizza pan. The way to this girl’s heart is definitely through wheat and flour goods, so imagine my glee when the hot bowl of nihari hit our table. Aromatic and filled with huge cubes of tender beef, the savory gravy was fairly scoopable with the trusty paratha and paired well with the side salad of iceberg lettuce, green peppers and carrots that was dropped off at our table. The zesty dressing was an added bonus (that was drizzled over just about every other dish).

My lunch comadre, on the other hand, definitely scored with the chicken tawa, again, whipped up on these magical griddle skillets that rendered the chicken tender and moist. A heat-seeker’s delight, the spicy tawa was heavy on the ginger, chili and garlic with just what I’m sure is a secret garam masala mix. We countered the spice level with creamy lassis—a sweet pineapple for my pal and a salty iteration for myself. While I usually have a sweet tooth (nay, molar), the salty lassi, made with milk, tart yogurt and just a pinch of salt was indulgent and creamy without inducing a ton of guilt.

Our meal continued with shared entrees of chicken biryani and kebab rolls. The former, seemingly a wee replica of K2 itself, as mounds of saffron-infused basmati gave way to tender marinated chicken with a spicy kick that cleared my nasal passages right open (though I’m not sure they had been closed…). On its own, the naan bread could have used a pinch of salt over the glistening top…but the flavor bomb of the biryani more than made up for that.

Because I’m a sucker for efficient eats on the go, the kebab rolls—yes, both of them—were also a win. At least six inches long, and filled with ground beef kebab, the rolls have more onions than I’d normally care for, fresh cilantro, and a savory chaat masala blend and just a touch of chutney. The paratha, which worked as our wrap, kept the fillings safe and there was nary a wayward bite. Although the order does come with a fair warning (the rolls take 15 to 25 minutes to prepare), they’re definitely worth the wait.

We wrapped up lunch with a quick scan of the locale. Any semblance of Jalisco decor has been cleared and none has been put up in its place—a visit to Kohinoor means you’re concentrating on the food, not the digs, and that’s totally fine by me.