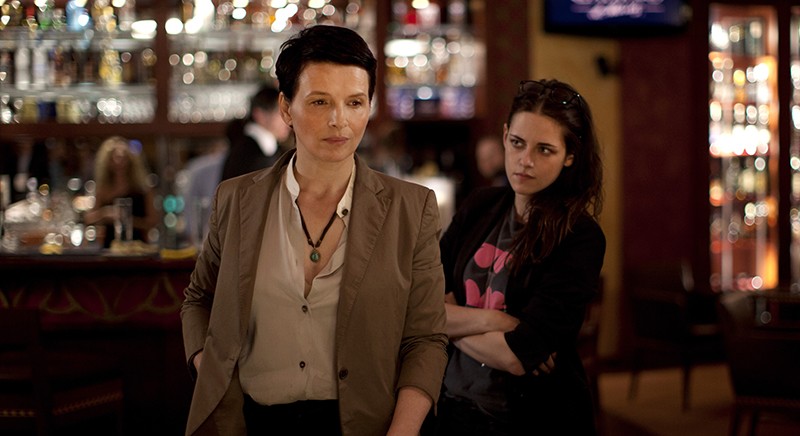 Whether Kristen Stewart was starring in terrible vampire movies, sleeping with her Snow White and the Huntsman director, pouting on the red carpet or just generally looking uncomfortable, the media and public have never had trouble finding reasons to pick on her. To be frank, it was hard to find a reason to like her.

But if you kept a close eye on her performances alone and blocked out all the nonsense, she was effectively proving herself as an actress. She perfectly embodied indecisive teen angst opposite Jesse Eisenberg in Adventureland and she was solid as Joan Jett in The Runaways. She also offered sturdy support to Julianne Moore in Still Alice. Most triumphantly, she recently became the first American actress to win a César Award (the French Oscars), honored for her supporting work in Clouds of Sils Maria.

In Sils Maria Stewart plays Valentine, the personal assistant to successful actress Maria (Juliette Binoche, fabulous as always). Valentine is not a showy role full of histrionics, but her glasses, introverted personality and quiet confidence require layered depth and screen presence. As the film opens on a symbolically bumpy train ride, Valentine and Maria are on their way to an awards reception that Maria is wholeheartedly unenthused about attending. Her big career break that launched her to stardom came when she was 18 and played Sigrid in a play (and later a movie) called Maloja Snake, named after the low-lying clouds that "snake" their way through the Maloja Pass in the Swiss Alps. In Maloja Snake, Sigrid tormented the 40-year-old Helena, who was in love with Sigrid.

The offer comes: A theater director (Lars Eidinger) wants Maria to return to the play, but this time as Helena. A young Hollywood starlet named Jo-Ann (Chloë Grace-Moretz) will assume the role of Sigrid. Maria waffles but ultimately accepts, then travels to the town of Sils Maria near the Maloja Pass to rehearse. The intention is to get close to the material, but in reality Maria has trouble seeing the content from Helena's perspective.

This is where Valentine becomes prominent, as she explains an alternate perspective on the play that Maria isn't able to absorb. Maria and Valentine have a playful dynamic: They care and look out for one another, eat and drink together, and discuss their personal feelings. But when they disagree, the tension is palpable, as personal and professional lines are blurred to a foggy degree. Valentine is smart and she knows it. She respects Maria, but not to the point that she'll be a "yes" woman to whatever Maria says. It's these moments of tension when the film is most alive, as you don't know who's right or wrong and it doesn't matter — you just enjoy watching Stewart and Binoche play off one another so effectively.

Writer/director Olivier Assayas (Irma Vep) is consciously merging the content of the play (as Valentine and Maria rehearse) with the characters' real lives, to the point that in some conversations it's nearly impossible to tell what's the play and what's true conversation. For example, we can't help but wonder if, just as Helena develops a crush on Sigrid, Maria now has a crush on Valentine. And so you have to listen closely to the dialogue; think, engage with the characters and trust those involved that the payoff will be worth it. Because you know what? It is, even if things are left a tad unclear in the end and a better sense of the play itself is needed in order to fully appreciate the Valentine/Maria dynamic.

Aesthetically, Assayas' film is very ... theatrical. The editing often fades to black only to fade in at a new location, simulating dropping the curtain between scenes for set changes in a live play. The effect is that everything we're seeing is a play, a sideshow, a drama in a world of crazy in which everything is a spectacle and few things are tangibly real. Maria, Sigrid, Jo-Ann, doesn't matter: The world's a stage and people are but mere players of inconsequence, billions of minions inhabiting the same planet at the same time. The Maloja Pass clouds — poetic, even elegant as they move through the beautiful countryside — are symbolic: They swerve their way through mother nature in much the same way that people swerve in and out of one another's lives, often without much indentation.

Clouds of Sils Maria also has art-reflecting-life irony: We can't help but smile when listening to Stewart's Valentine describe Jo-Ann's troublesome tendencies. It's celebrity news gossip at its worst and Valentine seems to enjoy (and forgive) every salacious detail. Here's hoping Stewart has successfully left scandal behind and will continue to take on challenging roles, as she clearly has the talent for a long, long career. Just like Maria.

Opens May 1 at Santikos Bijou